The Seven Champions of Christendom 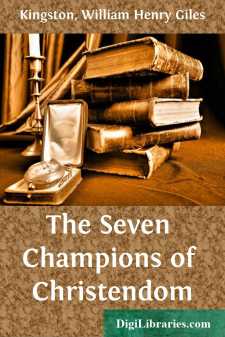 The following pages should not go forth into the world without due acknowledgment being made to that worthy old Dominie, Richard Johnson, to whose erudite but somewhat unreadable work the author is so largely indebted. As he flourished at the end of the sixteenth century, and the commencement of the seventeenth, great allowances should be made for his style, which is certainly not suited to the taste of this generation. It is to be hoped that the present version, while much of his vivid imagery is retained, may be free from his more glaring errors. And, thus quoting the Dominie’s dedication:—

“To all courteous readers The Author wisheth encrease of vertuous knowledge.

“Gentle readers, in kindness accept my labours, and be not like the chattering cranes, nor Momus’ mates, that carp at everything. What the simple say I care not; what the spightful speak I pass not; only the censure of the conceited I stand unto; that is the mark I aym at; whose good likings if I obtain, I have won my race; if not, I faint in the first attempt, and so lose the quiet of my happy goal.

“Yours in kindness and command,—

Chapter One. The Birth of Saint George.

Who has not heard of the Seven Champions of Christendom—of the wonderful adventures they went through—of the dangers they encountered, and the heroic deeds they performed? Should any persons exist ignorant of the history of those noble knights, let them with attentive ears now listen to my veracious chronicle.

Gallant and dauntless as were all those seven heroes, yet not one equalled in valour “Saint George of Merrie England.” Many countries have in consequence claimed him as their own especial Champion. Portugal, Germany, Greece, and Russia, for what is known to the contrary, would be glad to have him; but we have proof undoubted that to England he alone belongs, even if we did not see him, on many a golden guinea, engaged in his desperate encounter with the most terribly terrific and greenest of green dragons. Not only are his orders worn by nobles, but by British monarchs themselves, while, in memory of his heroic deeds, they lead forth their armies under his banner. However, many long years have passed away since he astonished the world by his prowess. Of royal birth was his mother, the daughter of one of England’s early kings; a Duke and High Steward of the realm was his father. Of the name of the king history is most mysteriously silent, or of the extent of his dominions; but there can be no doubt that the ancient city of Coventry was situated within them, and that, if not the principal, it was one of the principal cities of the realm, and, moreover, that a prison existed there on the silent system. Thus, when people are unfit to be spoken to, it is said, by a figure of speech, that they are sent to Coventry.

In Coventry the Lord High Steward and his royal bride resided. Now, some time before the Princess was about to present her husband with a babe, she dreamed a dream; it was enough to terrify her, for she dreamed that, instead of a smiling infant, she should have to nurse a little green dragon....