The Settlers A Tale of Virginia 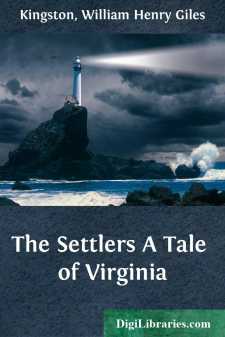 The abode of Captain Amyas Layton overlooked the whole of Plymouth Sound. It stood on the eastern side near its northern end, on the wood-covered heights which rise above that magnificent estuary. From the windows could be seen the town of Plymouth, with its inner harbour, on which floated many a stout bark of varied rig and size; some engaged in the coasting trade, others just arrived from foreign voyages, and others destined to carry the flag of England to far-off lands. In front of the house had been set up a tall flagstaff, which the captain was wont on high days and holidays to deck with gay banners, or at other times to employ in making signals to vessels in the Sound. The grounds were surrounded by a moat with a drawbridge, above which was a gateway adorned with curiously carved images once serving as the figure-heads of two Spanish galleys. The house itself, constructed chiefly of a framework of massive timber, filled in with stone or brick, had no pretensions to architectural beauty, albeit its wide, projecting eaves, its large chimneys, and latticed windows, with its neat, well-kept garden full of gay flowers, gave it a picturesque and quaint appearance. Above the low wall on the inner side of the moat, was planted a battery of brass cannon, elaborately ornamented, and evidently also taken from the Spaniards; though they were placed there as trophies of victories won rather than for use. In truth, the old seaman’s dwelling, full as it was of many other warlike engines, had no pretensions to the character of a fortress; it had been his fancy to gather within its walls the spoils of many a hard-fought fight to remind him of days gone by, especially when he had sailed out of Plymouth Sound in his stout bark in company with the gallant Lord Howard, Drake, Frobisher, Hawkins, and other brave seamen whose names are known to fame, to make fierce onslaught on the vaunting Spaniards, as their proud Armada swept up the Channel. The porch at the front entrance was adorned with Spanish handiwork—a portion of the stern-gallery of the huge Saint Nicholas; while at each corner of the building were fixed other parts of that mighty galleon, or of some other ship of the many which had been, by God’s good providence, delivered into the hands of those whom the haughty Spaniards came vainly threatening to enslave.

The house contained a good-sized dining-hall. At one end was a broad fireplace, and mantelpiece supported by richly carved figures, also taken from the stern-gallery of a Spanish bark. Above it appeared the model of the Golden Lion, the captain’s own ship. The walls were adorned with breastplates and morions, swords and matchlocks, huge pistols, with other weapons of curious form, and three banners captured from the foe, regarded by the captain as the chiefest of his trophies. Here, too, were also bows and arrows, spears and clubs, and various implements, remembrances of the last voyage he had made to America.

The captain was walking to and fro in the shade....