The Sequel of Appomattox : a chronicle of the reunion of the states 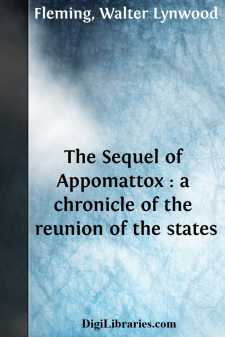 CHAPTER I. THE AFTERMATH OF WAR

When the armies of the Union and of the Confederacy were disbanded in 1865, two matters had been settled beyond further dispute: the Negro was to be free, and the Union was to be perpetuated. But, though slavery and state sovereignty were no longer at issue, there were still many problems which pressed for solution. The huge task of reconstruction must be faced. The nature of the situation required that the measures of reconstruction be first formulated in Washington by the victors and then worked out in the conquered South. Since the success of these policies would depend in a large measure upon their acceptability to both sections of the country, it was expected that the North would be influenced to some extent by the attitude of the Southern people, which in turn would be determined largely by local conditions in the South. The situation in the South at the close of the Civil War is, therefore, the point at which this narrative of the reconstruction naturally takes its beginning.

The surviving Confederate soldiers came straggling back to communities, which were now far from being satisfactory dwelling places for civilized people. Everywhere they found missing many of the best of their former neighbors. They found property destroyed, the labor system disorganized, and the inhabitants in many places suffering from want. They found the white people demoralized and sometimes divided among themselves and the Negroes free, bewildered, and disorderly, for organized government had lapsed with the surrender of the Confederate armies.

Beneath a disorganized society lay a devastated land. The destruction of property affected all classes of the population. The accumulated capital of the South had disappeared in worthless Confederate stocks, bonds, and currency. The banks had failed early in the war. Two billion dollars invested in slaves had been wiped out. Factories, which had been running before the war or were developed after 1861 in order to supply the blockaded country, had been destroyed by Federal raiders or seized and sold or dismantled because they had furnished supplies to the Confederacy. Mining industries were paralyzed. Public buildings which had been used for war purposes were destroyed or confiscated for the uses of the army or for the new freedmen's schools. It was months before courthouses, state capitols, school and college buildings were again made available for normal uses. The military school buildings had been destroyed by the Federal forces. Among the schools which suffered were the Virginia Military Institute, the University of Alabama, the Louisiana State Seminary, and many smaller institutions. Nearly all these had been used in some way for war purposes and were therefore subject to destruction or confiscation.

The farmers and planters found themselves "land poor." The soil remained, but there was a prevalent lack of labor, of agricultural equipment, of farm stock, of seeds, and of money with which to make good the deficiency. As a result, a man with hundreds of acres might be as poor as a Negro refugee....