The Sense of Beauty Being the Outlines of Aesthetic Theory 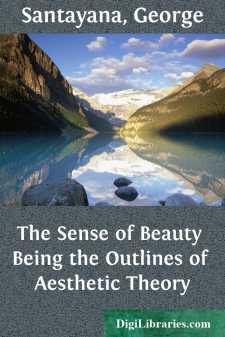 This little work contains the chief ideas gathered together for a course of lectures on the theory and history of aesthetics given at Harvard College from 1892 to 1895. The only originality I can claim is that which may result from the attempt to put together the scattered commonplaces of criticism into a system, under the inspiration of a naturalistic psychology. I have studied sincerity rather than novelty, and if any subject, as for instance the excellence of tragedy, is presented in a new light, the change consists only in the stricter application to a complex subject of the principles acknowledged to obtain in our simple judgments. My effort throughout has been to recall those fundamental aesthetic feelings the orderly extension of which yields sanity of judgment and distinction of taste.

The influences under which the book has been written are rather too general and pervasive to admit of specification; yet the student of philosophy will not fail to perceive how much I owe to writers, both living and dead, to whom no honour could be added by my acknowledgments. I have usually omitted any reference to them in foot-notes or in the text, in order that the air of controversy might be avoided, and the reader might be enabled to compare what is said more directly with the reality of his own experience.

The sense of beauty has a more important place in life than aesthetic theory has ever taken in philosophy. The plastic arts, with poetry and music, are the most conspicuous monuments of this human interest, because they appeal only to contemplation, and yet have attracted to their service, in all civilized ages, an amount of effort, genius, and honour, little inferior to that given to industry, war, or religion. The fine arts, however, where aesthetic feeling appears almost pure, are by no means the only sphere in which men show their susceptibility to beauty. In all products of human industry we notice the keenness with which the eye is attracted to the mere appearance of things: great sacrifices of time and labour are made to it in the most vulgar manufactures; nor does man select his dwelling, his clothes, or his companions without reference to their effect on his aesthetic senses. Of late we have even learned that the forms of many animals are due to the survival by sexual selection of the colours and forms most attractive to the eye. There must therefore be in our nature a very radical and wide-spread tendency to observe beauty, and to value it. No account of the principles of the mind can be at all adequate that passes over so conspicuous a faculty.

That aesthetic theory has received so little attention from the world is not due to the unimportance of the subject of which it treats, but rather to lack of an adequate motive for speculating upon it, and to the small success of the occasional efforts to deal with it. Absolute curiosity, and love of comprehension for its own sake, are not passions we have much leisure to indulge: they require not only freedom from affairs but, what is more rare, freedom from prepossessions and from the hatred of all ideas that do not make for the habitual goal of our thought....