The Secrets of the Great City 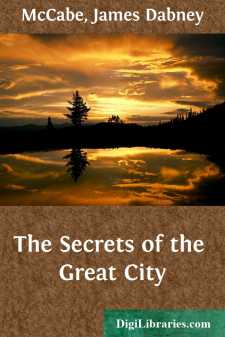 THE CITY OF NEW YORK.

The City of New York is the largest and most important in America. Its corporate limits embrace the whole of Manhattan Island, on which it is situated, and which is bounded by the Hudson, the East and Harlem rivers, and by Spuyten Duyvil creek, which last connects the Harlem with the Hudson. Being almost entirely surrounded by deep water, and lying within sight of the ocean, and only sixteen miles from it, the city is naturally the greatest commercial centre of the country. The extreme length of the island is fifteen miles, and its average breadth a mile and a half. The city lies at the head of New York Bay, which stretches away for miles until the Narrows, the main entrance to the harbor, are reached, presenting a panorama unsurpassed for natural and artificial beauty. The people of New York are very proud of their bay, and justly regard it as one of the most magnificent in the world.

The city was originally settled by the Dutch, toward the close of the year 1614, and called by them New Amsterdam. In 1664, it passed into the hands of the English, and was named New York, which name was also given to the whole province. The first settlement was made at the extreme lower part of the island, on the spot now known as the Battery. A fort was erected, and the little hamlet surrounded by a strong stockade as a protection against the savages. The first settlers were eminently just in their dealings with the red men, and purchased the island from them, giving them what was considered by all parties a fair price for it. They felt sure that their new home was destined to become a place of importance in the course of time. Its commercial advantages were evident at a glance; the climate was delightful, being neither so rigorous as that of the Eastern colonies, nor so enervating as that of the Southern. The hopes of the founders of New York are more than realized in the metropolis of to-day.

The city grew very slowly at the beginning. In 1686, it was regularly incorporated by a charter. In 1693, the first printing press was set up in the city by William Bradford. In 1690, New York contained five hundred and ninety-four houses and six thousand inhabitants. In 1790, one hundred years later, the city had a population of thirty-three thousand. It was not until the beginning of the present century that it commenced that wonderful growth which has given it its present importance. At first it spread more rapidly on the east side than on the west. As late as the close of the Revolution, what is now Chambers street was the extreme upper limit, and its line was marked by a strong stockade, built across from river to river, with gates leading to the various country roads which traversed the upper part of the island.

The City of New York now extends from the Battery to the Harlem river and Spuyten Duyvil creek, and is built up with great regularity as far as One-hundred and Thirtieth street. Harlem, Yorkville, Manhattanville, Bloomingdale, Carmansville, and Washington Heights or Fort Washington, were all originally separate villages, but are now parts of the great city....