The Secret Chamber at Chad 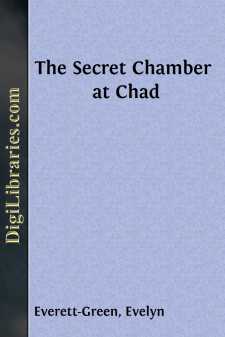 Chapter I: A Mysterious Visitor.

The great house at Chad was wrapped in sleep. The brilliant beams of a June moon illuminated the fine pile of gray masonry with a strong white light. Every castellated turret and twisted chimney stood out in bold relief from the heavy background of the pine wood behind, and the great courtyard lay white and still, lined by a dark rim of ebon shadow.

Chad, without being exactly a baronial hall of the first magnitude, was nevertheless a very fine old house. It had been somewhat shorn of its pristine glories during the Wars of the Roses. One out of its original two quadrangles had then been laid in ruins, and had never been rebuilt. But the old inner quadrangle still remained standing, and made an ample and commodious dwelling house for the family of the Chadgroves who inhabited it; whilst the ground which had once been occupied by the larger outer quadrangle, with its fortifications and battlements, was now laid out in terraces and garden walks, which made a pleasant addition to the family residence.

The seventh Henry was on the throne. The battle of Bosworth Field had put an end to the long-drawn strife betwixt the houses of York and Lancaster. The exhausted country was beginning to look forward to a long period of prosperity and peace; and the household at Chad was one of the many that were rejoicing in the change which had come upon the public outlook, and was making the most of the peaceful years which all trusted lay before the nation.

Several changes of some importance had passed over Chad during the previous century. The wars had made gaps in the ranks of the family to whom it had always belonged. There had been sundry edicts of confiscation--as speedily repealed by the next change in the fate of the day; and more than once the head had been struck down by death, and the house and lands had passed either to a minor or to some other branch of the family. There had been the confusion and strife betwixt the various branches of the family which was a characteristic of that age of upheaval and strife; but the present owner of the estate, Sir Oliver Chadgrove, seemed firmly settled in his place. He had fought on Henry's side at Bosworth, and had been confirmed by that monarch in the possession of the estate of Chad; and since that day none had tried to dispute his claim; nor, indeed, would it have been very easy to do so, as he was undoubtedly the rightful representative of the older branch of the family.

A just and kindly man, he was beloved of those about him, and would have been staunchly supported by his retainers had any adversary arisen against him. His only enemy was the Lord of Mortimer, who owned Mortimer's Keep, the adjoining property, and had cast covetous eyes on Chad during the stormy days of the late wars, more than once trying unsuccessfully to step in between the disputing parties and claim it as his own, not by the power of right, but by that of might alone. However, he had not been successful in this attempt; and for the past few years there had been a semblance of friendliness between Sir Oliver and his proud and powerful neighbour....