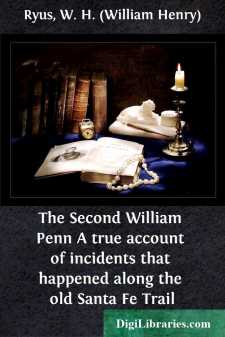 You who take the trouble to read these reminiscences of the Santa FeTrail may be curious to know how much of them are literally true.

The writer of this preface was intimately acquainted with the author of this book, and knows that he has not yielded to temptation to draw upon his imagination for the incidents related herein, but has adhered strictly to the truth. Truth is, sometimes, "stranger than fiction," and is an indispensable requisite to accurate history, yet it may sometime destroy the charm of fiction.

The author of this book had a real and exceptional knowledge of Indian character and Indian traits, and his genuine tact in trading and treating with them, and the success which he had in sustaining friendly relations with them was one of the wonders of the West, and was a circumstance of much comment by those who had occasion to use the Santa Fe Trail.

It is small wonder, then, that "Little Billy of the Stage Coach" won for himself the title of the "Second William Penn."

In the early Sixties, the region through which the Old Trail passed was an unexplored territory where constant struggles for supremacy between the Wild Red Man and the hardy White man were carried on.

Many and tragical were the hardships endured by those who attempted to open up this famous highway and establish a line of communication between the East and the West. The only method of travel was by odd freight caravans drawn by oxen or the old-fashioned, lumbering uncomfortable Concord Stage Coaches drawn by five mules.

The stage coach carried besides its passengers the United States mail and express.

An escort of United States militia often accompanied the stage coach in order to protect it against attacks of the Indians at that time when the plains were invested with the Arapahoes, Comanches, Cheyennes, Kiowas and other tribes, some of whom were on the warpath, bedecked in war paint and feathers.

The Indians were often in search of something to satisfy their hunger, rather than the scalps of the white men. The author of this book won their confidence and friendship by dividing with them his rations, and showing them that he was willing to compensate them for the privilege of traveling through their country. He had so many friendly conferences and made so many treaties with them while on his trips across the plains that he came to be called the "Second William Penn."

He came into personal contact with the famous chiefs of the Indian tribes, and won their good will to such an extent that their behavior toward him and his passengers was always most excellent.

The author has, in these pages, told of many encounters between the whites and the Indians that were narrated to him by the Indians. He holds the Indians blameless for many of the attacks attributed to them, and calls attention to the Chivington Massacre and the Massacre of the Nine Mile Ridge, related in the following pages.

He begs the readers not to censure too severely the Indian who simply pleaded for food with which to satisfy his hunger, and sought to protect his wigwam from the murderous attacks of unscrupulous white men.

I gladly recommend this tale as sound reading to all who desire to know the truth concerning the incidents which actually occurred along the Old Trail, and the real friendly relations which existed between the Indians and the white men, such as our Author and Kit Carson, who were well acquainted with their motives and characteristics....