The Second Story of Meno; a continuation of Socrates' dialogue with Meno in which the boy proves root 2 is irrational 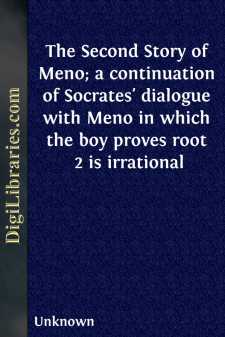 Socrates: Well, here we are at the appointed time, Meno.

Meno: Yes, and it looks like a fine day for it, too.

Socrates: And I see our serving boy is also here.

Boy: Yes, I am, and ready to do your bidding.

Socrates: Wonderful. Now, Meno, I want you to be on your guard, as you were the other day, to insure that I teach nothing to the boy, but rather pull out of his mind the premises which are already there.

Meno: I shall do my best, Socrates.

Socrates: I can ask more of no man, Meno, and I am certain that you will do well, and I hope I will give you no call to halt me in my saying if I should say too much, in which you would feel I was actually teaching the boy the answer to this riddle.

Meno: No, Socrates, I don't think I will have to call you on anything you might say today, for the most wondrously learned men of the group of Pythagoras have spent many hours, weeks, and even months and years toiling in their manner to arrive at the mystic solutions to the puzzles formed by the simple squares with which we worked the other day. Therefore, I am certain to regain my virtue, which I lost the other day, when I was so steadfastly proven by you to be in error in my statement that the root of a square with an area of two square feet was beyond this boy, who is a fine boy, whom we must make to understand that he should do his best here, and not feel that he has done any wrongness by causing me to lose my virtue to you the other day.

Socrates: Meno, my friend, it is my opinion, and I hope it will soon be yours, that your virtue was increased the other day, rather than decreased.

Meno: I fail to see how, when I was humiliated by seeing this young boy, of modest education, arrive in minutes at the highest mystic levels of the magic of the Pythagoreans. Most of all when I wagered as many dinners as you could eat at my house that this could not be the case.

Socrates: First, friend Meno, let me assure you that I will promise never to eat you out of house and home, not that I could if I tried, for my tastes are simple and your wallet is large. Nevertheless, Meno, my friend, I would hasten to add that I will promise, if you like, not to ever come to your table uninvited.

Meno: Socrates, you know you are always welcome at my table, except when I am suffering from my ulcer, which you aggravate greatly, or at times when I am entertaining the highest nobles of the land, and you would appear out of place in your clothing. (Socrates was known for his simple attire, and for wearing his garments over and over till they wore out. However, the only surviving example of his writing is a laundry list, so we know he kept his clothes clean and somewhat presentable, though simple)

Socrates: I would hope you would have me over because I was a good influence on your development, than for any other reason....