The Sea-Witch Or, the African Quadroon : a Story of the Slave Coast 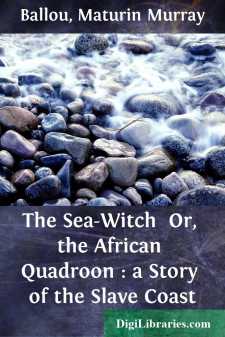 OUR story opens in that broad, far-reaching expanse of water which lies deep and blue between the two hemispheres, some fifteen degrees north of the equator, in the latitude of Cuba and the Cape Verd Islands. The delightful trade winds had not fanned the sea on a finer summer's day for a twelvemonth, and the waves were daintily swelling upon the heaving bosom of the deep, as though indicating the respiration of the ocean. It was scarcely a day's sail beyond the flow of the Caribbean Sea, that one of those noblest results of man's handiwork, a fine ship, might have been seen gracefully ploughing her course through the sky-blue waters of the Atlantic. She was close-hauled on the larboard tack, steering east-southeast, and to a sailor's eye presented a certain indescribable something that gave her taut rig and saucy air a dash of mystery, which would have set him to speculating at once as to her character and the trade she followed.

Few things can be named that more potently challenge our admiration than a full-sized ship under way; her myriad of ropes, sails and appointments, all so complete and well-controlled, the power of her volition, the promptness with which she obeys the slightest movement of the helm, the majestic grace of her inclination to the power of the winds, and the foaming prow and long glistening wake, all go to make up the charm and peculiarity of a nautical picture. There is true poetry in such a scene as this, beauty fit to move the heart of an anchorite. No wonder the sailor loves his ship like a mistress; no wonder he discourses of her charms with the eloquence of true love and confiding trust; no landsman can be more enamored of his promised bride.

But the craft to which we especially refer at the present writing, was a coquette of the first class, beautiful in the extreme, and richly meriting the name that her owners had placed in golden letters on her stern—the "Sea Witch." She was one of that class of vessels known as flat upon the floor, a model that caused her to draw but little water, and enabled her to run free over a sandbar or into an inlet, where an ordinary ship's long boat would have grounded. She was very long and sharp, with graceful concave lines, and might have measured some five hundred tons. Speed had evidently been the main object aimed at in her construction, the flatness of her floor giving her great buoyancy, and her length ensuring fleetness. These were points that would at once have struck a sailor's eye, as he beheld the ship bowling gracefully on her course by the power of the trade winds that so constantly befriend the mariners in these latitudes.

We have said that the "Sea Witch" was of peculiar model, and so indeed she was. Contrary to the usual rig of what are called clipper ships, her masts, instead of raking, were perfectly upright, for the purpose of enabling her to carry more press of sail when need be, and to hold on longer when speed should be of vital importance—that the straighter construction of the masts furthers this object, is a fact long since proven in naval architecture....