The Sea-Kings of Crete 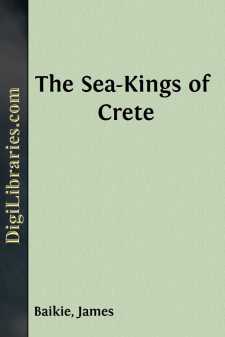 The object aimed at in the following pages has been to offer to the general reader a plain account of the wonderful investigations which have revolutionized all ideas as to the antiquity and the level of the earliest European culture, and to endeavour to make intelligible the bearing and significance of the results of these investigations. In the hope that the extraordinary resurrection of the first European civilization may appeal to a more extended constituency than that of professed students of ancient origins, the book has been kept as free as possible from technicalities and the discussion of controverted points; and throughout I have endeavoured to write for those who, while from their school days they have loved the noble and romantic story of Ancient Greece, have been denied the opportunity of a more thorough study of it than comes within the limits of an ordinary education.

In the first chapter this standpoint may seem to have been unduly emphasized, and the retelling of the ancient legends may be accounted mere surplusage. Such, no doubt, it will be to some readers, but perhaps they may be balanced by others whose Page viii recollection of the great stories of Classic Greece has grown a little faint with the lapse of years, and who are not unwilling to have it prompted again. Reference to the legends was in any case unavoidable, since one of the most remarkable results of the explorations has been the disclosure of the solid basis of historic fact on which they rested; and, if the book was to accomplish its purpose for the readers for whom it was designed, reference seemed almost necessarily to involve retelling.

I have to acknowledge extensive obligations to the writings and reports of the various investigators who have accomplished so wonderful a resurrection of this ancient world. My debt to the works of Dr. A. J. Evans will be manifest to all who have any acquaintance with the subject; but to such authors as Mrs. H. B. Hawes, Dr. Mackenzie, Professors Burrows, Murray, and Browne, and Messrs. D. G. Hogarth and H. R. Hall, to name only a few among many, my obligations are only less than to the acknowledged chief of Cretan explorers.

To the Rev. James Kennedy, D.D., librarian of the New College, Edinburgh, and to the Rev. C. J. M. Middleton, M.A., Crailing, my thanks are due for invaluable help afforded in the collection of material, and I have been not less indebted to Mr. A. Brown, Galashiels, and to Messrs. C. H. Brown and C. R. A. Howden, Edinburgh, and others, for their assistance in the preparation of the illustrations. To Mr. A. Brown in particular are due plates II., III., IV., V., IX., X., XV., XVI., XX., Page ix XXIII., XXIV., and XXV.; and to Messrs. C. H. Brown and C. R. A. Howden Plates I., VII., VIII., XI., XII., XVII. (I), and XXI. I have to record my hearty thanks to the Council of the Society for the Promotion of Hellenic Studies for the use of Plates XXIX. and XXX., reproduced by their permission from the Journal of Hellenic Studies; to the Committee of the British School at Athens for the use of Plate XIX....