The Scouts of Stonewall The Story of the Great Valley Campaign 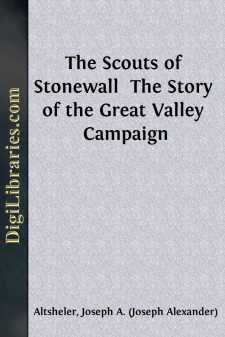 CHAPTER I. IN THE VALLEY

A young officer in dingy Confederate gray rode slowly on a powerful bay horse through a forest of oak. It was a noble woodland, clear of undergrowth, the fine trees standing in rows, like those of a park. They were bare of leaves but the winter had been mild so far, and a carpet of short grass, yet green, covered the ground. To the rider's right flowed a small river of clear water, one of the beautiful streams of the great Virginia valleys.

Harry Kenton threw his head back a little and drew deep breaths of the cool, crisp air. The light wind had the touch of life in it. As the cool puffs blew upon him and filled his lungs his chest expanded and his strong pulses beat more strongly. But a boy in years, he had already done a man's work, and he had been through those deeps of passion and despair which war alone brings.

A year spent in the open and with few nights under roof had enlarged Harry Kenton's frame and had colored his face a deep red. His great ancestor, Henry Ware, had been very fair, and Harry, like him, became scarlet of cheek under the beat of wind and rain.

Had anyone with a discerning eye been there, to see, he would have called this youth one of the finest types of the South that rode forth so boldly to war. He sat his saddle with the ease and grace that come only of long practice, and he controlled his horse with the slightest touch of the rein. The open, frank face showed hate of nobody, although the soul behind it was devoted without any reserve to the cause for which he fought.

Harry was on scout duty. Although an officer on the staff of Colonel Talbot, commander of the Invincibles, originally a South Carolina regiment, he had developed so much skill in forest and field, he had such acuteness of eye and ear, that he was sent often to seek the camps of the enemy or to discover his plans. His friends said that these forest powers were inherited, that they came from some far-away ancestor who had spent his life in the wilderness, and Harry knew that what they said was true.

Despite the peaceful aspect of the forest and the lack of human presence save his own, he rode now on an errand that was full of danger. The Union camp must lie on the other side of that little river, not many miles farther on, and he might meet, at any moment, the pickets of the foe. He meant to take the uttermost risk, but he had no notion of being captured. He would suffer anything, any chance, rather than that. He had lately come into contact with a man who had breathed into him the fire and spirit belonging to legendary heroes. To this man, short of words and plain of dress, nothing was impossible, and Harry caught from him not merely the belief, but the conviction also.

Late in the autumn the Invincibles, who had suffered severely at Bull Run and afterward had been cut down greatly in several small actions in the mountains, had been transferred to the command of Stonewall Jackson in the Shenandoah Valley. Disease and the hospital had reduced the regiment to less than three hundred, but their spirits were as high as ever....