The Scientific Evidences of Organic Evolution 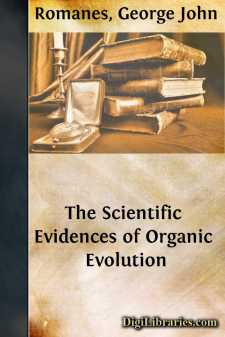 THE SCIENTIFIC EVIDENCES OF ORGANIC EVOLUTION.

Although it is generally recognised that the Origin of Species has produced an effect both on the science and the philosophy of our age which is without a parallel in the history of thought, admirers of Mr. Darwin's genius are frequently surprised at the ignorance of his work which is displayed by many persons who can scarcely be said to belong to the uncultured classes. The reason of this ignorance is no doubt partly due to the busy life which many of our bread-winners are constrained to live; but it is also, I think, partly due to mere indolence. There are thousands of educated persons who, on coming home from their daily work, prefer reading literature of a less scientific character than that which is supplied by Mr. Darwin's works; and therefore it is that such persons feel these works to belong to a category of books which is to them a very large one—the books, namely, which never are, but always to be, read. Under these circumstances I have thought it desirable to supply a short digest of the Origin of Species, which any man, of however busy a life, or of however indolent a disposition, may find both time and energy to follow.

With the general aim of the present abstract being thus understood, I shall start at the beginning of my subject by very briefly describing the theory of natural selection. It is a matter of observable fact that all plants and animals are perpetually engaged in what Mr. Darwin calls a “struggle for existence.” That is to say, in every generation of every species a great many more individuals are born than can possibly survive; so that there is in consequence a perpetual battle for life going on among all the constituent individuals of any given generation. Now, in this struggle for existence, which individuals will be victorious and live? Assuredly those which are best fitted to live: the weakest and the least fitted to live will succumb and die, while the strongest and the best fitted to live will be triumphant and survive. Now it is this “survival of the fittest” that Mr. Darwin calls “natural selection.” Nature, so to speak, selects the best individuals out of each generation to live. And not only so, but as these favoured individuals transmit their favourable qualities to their offspring, according to the fixed laws of heredity, it follows that the individuals composing each successive generation have a general tendency to be better suited to their surroundings than were their forefathers. And this follows, not merely because in every generation it is only the flower of the race that is allowed to breed, but also because if in any generation some new and beneficial qualities happen to appear as slight variations from the ancestral type, these will be seized upon by natural selection and added, by transmission in subsequent generations, to the previously existing type. Thus the best idea of the whole process will be gained by comparing it with the closely analogous process whereby gardeners and cattlebreeders create their wonderful productions; for just as these men, by always selecting their best individuals to breed from, slowly but continuously improve their stock, so Nature, by a similar process of selection, slowly but continuously makes the various species of plants and animals better and better suited to the external conditions of their life.

Now, if this process of continuously adapting organisms to their environment takes place in nature at all, there is no reason why we should set any limits on the extent to which it is able to go up to the point at which a complete and perfect adaptation is achieved....