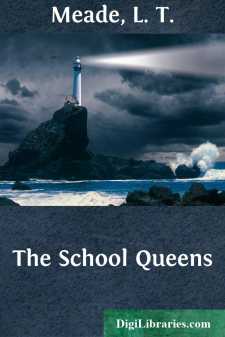 CHAPTER I THE FASCINATING MAGGIE

Cicely Cardew and her sister Merry were twins. At the time when this story opens they were between fifteen and sixteen years of age. They were bright, amiable, pretty young girls, who had never wanted for any pleasure or luxury during their lives. Their home was a happy one. Their parents were affectionate and lived solely for them. They were the only children, and were treated—as only children often are—with a considerable amount of attention. They were surrounded by all the appliances of wealth. They had ponies to ride and carriages to drive in, and each had her own luxurious and beautifully furnished bedroom.

It was Mr. Cardew’s wish that his daughters should be educated at home. In consequence they were not sent to any school, but had daily masters and governesses to instruct them in the usual curriculum of knowledge. It might be truly said that for them the sun always shone, and that they were carefully guarded from the east wind. They were naturally bright and amiable. They had their share of good looks, without being quite beautiful. They had not the slightest knowledge of what the world meant, of what sorrow meant, or pain. They were brought up in such a sheltered way that it seemed to them that there were no storms in life. They were not discontented, for no one ever breathed the word in their presence. Their requests were reasonable, for they knew of no very big things to ask for. Even their books were carefully selected for them, and their amusements were of a mild and orderly character.

Such were the girls when this story opens on a bright day towards the end of a certain July. Their home was called Meredith Manor, and Merry was called after an old ancestor on their mother’s side to whom the house had at one time belonged.

Mr. Cardew was a merchant-prince. Mrs. Cardew belonged to an old county family. If there was one thing in the world that Cicely and Merry thought nothing whatever about, it was money. They could understand neither poverty nor the absence of gold.

The little village near Meredith Manor was a model place, for Mr. Cardew, to whom it belonged, devoted himself absolutely to it. The houses were well drained and taken great care of. Prizes were offered for the best gardens; consequently each cottager vied with the other in producing the most lovely flowers and the most tempting fruits. The village consisted entirely of Mr. Cardew’s laborers and the different servants on his estate. There were, therefore, no hardships for the girls to witness at Meredith village. They were fond of popping in and out of the cottages and talking to the young wives and mothers, and playing with the babies; and they particularly enjoyed that great annual day when Mr. Cardew threw open the grounds of Meredith to the entire neighborhood, and when games and fun and all sorts of amusements were the order of the hour.

Besides the people who lived in the village, there was, of course, the rector, who had a pretty, picturesque, old brown house, with a nice garden in one corner of the grounds....