The School Book of Forestry 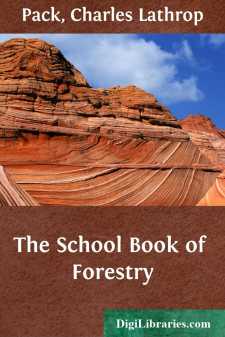 CHAPTER I HOW TREES GROW AND MULTIPLY

The trees of the forest grow by forming new layers of wood directly under the bark. Trees are held upright in the soil by means of roots which reach to a depth of many feet where the soil is loose and porous. These roots are the supports of the tree. They hold it rigidly in position. They also supply the tree with food. Through delicate hairs on the roots, they absorb soil moisture and plant food from the earth and pass them along to the tree. The body of the tree acts as a passage way through which the food and drink are conveyed to the top or crown. The crown is the place where the food is digested and the regeneration of trees effected.

The leaves contain a material known as chlorophyll, which, in the presence of light and heat, changes mineral substances into plant food. Chlorophyll gives the leaves their green color. The cells of the plant that are rich in chlorophyll have the power to convert carbonic-acid gas into carbon and oxygen. These cells combine the carbon and the soil water into chemical mixtures which are partially digested when they reach the crown of the tree. The water, containing salts, which is gathered by the roots is brought up to the leaves. Here it combines with the carbonic-acid gas taken from the air. Under the action of chlorophyll and sunlight these substances are split up, the carbon, oxygen and hydrogen being combined into plant food. It is either used immediately or stored away for future emergency.

Trees breathe somewhat like human beings. They take in oxygen and give off carbonic-acid gas. The air enters the tree through the leaves and small openings in the bark, which are easily seen in such trees as the cherry and birch. Trees breathe constantly, but they digest and assimilate food only during the day and in the presence of light. In the process of digestion and assimilation they give off oxygen in abundance, but they retain most of the carbonic acid gas, which is a plant food, and whatever part of it is not used immediately is stored up by the tree and used for its growth and development. Trees also give off their excess moisture through the leaves and bark. Otherwise they would become waterlogged during periods when the water is rising rapidly from the roots.

After the first year, trees grow by increasing the thickness of the older buds. Increase in height and density of crown cover is due to the development of the younger twigs. New growth on the tree is spread evenly between the wood and bark over the entire body of the plant. This process of wood production resembles a factory enterprise in which three layers of material are engaged. In the first two of these delicate tissues the wood is actually made. The inner side of the middle layer produces new wood while the outer side grows bark. The third layer is responsible for the production of the tough, outer bark. Year after year new layers of wood are formed around the first layers. This first layer finally develops into heartwood, which, so far as growth is concerned, is dead material....