The San Francisco calamity by earthquake and fire 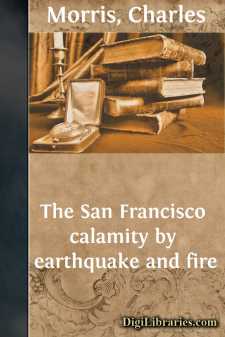 CHAPTER I. San Francisco and Its Terrific Earthquake.

On the splendid Bay of San Francisco, one of the noblest harbors on the whole vast range of the Pacific Ocean, long has stood, like a Queen of the West on its seven hills, the beautiful city of San Francisco, the youngest and in its own way one of the most beautiful and attractive of the large cities of the United States. Born less than sixty years ago, it has grown with the healthy rapidity of a young giant, outvieing many cities of much earlier origin, until it has won rank as the eighth city of the United States, and as the unquestioned metropolis of our far Western States.

It is on this great and rich city that the dark demon of destruction has now descended, as it fell on the next younger of our cities, Chicago, in 1872. It was the rage of the fire-fiend that desolated the metropolis of the lakes. Upon the Queen City of the West the twin terrors of earthquake and conflagration have descended at once, careening through its thronged streets, its marts of trade, and its abodes alike of poverty and wealth, and with the red hand of devastation sweeping one of the noblest centres of human industry and enterprise from the face of the earth. It is this story of almost irremediable ruin which it is our unwelcome duty to chronicle. But before entering upon this sorrowful task some description of the city that has fallen a prey to two of the earth's chief agents of destruction must be given.

San Francisco is built on the end of a peninsula or tongue of land lying between the Pacific Ocean and the broad San Francisco Bay, a noble body of inland water extending southward for about forty miles and with a width varying from six to twelve miles. Northward this splendid body of water is connected with San Pablo Bay, ten miles long, and the latter with Suisun Bay, eight miles long, the whole forming a grand range of navigable waters only surpassed by the great northern inlet of Puget Sound. The Golden Gate, a channel five miles long, connects this great harbor with the sea, the whole giving San Francisco the greatest commercial advantages to be found on the Pacific coast.

THE EARLY DAYS OF SAN FRANCISCO.

The original site of the city was a grant made by the King of Spain of four square leagues of land. Congress afterwards confirmed this grant. It was an uninviting region, with its two lofty hills and its various lower ones, a barren expanse of shifting sand dunes extending from their feet. The population in 1830 was about 200 souls, about equal to that of Chicago at the same date. It was not much larger in 1848, when California fell into American hands and the discovery of gold set in train the famous rush of treasure seekers to that far land. When 1849 dawned the town contained about 2,000 people. They had increased to 20,000 before the year ended. The place, with its steep and barren hills and its sandy stretches, was not inviting, but its ease of access to the sea and its sheltered harbor were important features, and people settled there, making it a depot of mining supplies and a point of departure for the mines....