by A. T. (Augustus Theodore) Bartholomew 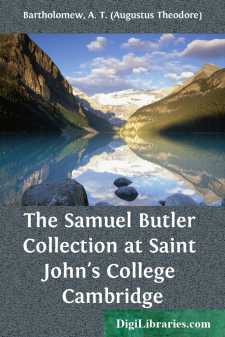 I.  PICTURES, SKETCHES AND DRAWINGSBY OR RELATING TO SAMUEL BUTLER

By his will Butler bequeathed his pictures, sketches, and studies to his executors to be destroyed or otherwise disposed of as they might think best, the proceeds (if any) to fall into residue.  They were not sold: some were given to Shrewsbury School; some to the British Museum; one, an unfinished sketch of the back of the house in which Keats died on the Piazza di Spagna, Rome, to the Keats and Shelley Memorial there; many were distributed among his friends, Alfred Cathie taking fifteen and I taking all that were left over.  Alfred lives in Canal Road, Mile End, and, this being on the route of the German air-raids, he was anxious to put his pictures in a place of safety.  Accordingly it was arranged between us in 1917 that I should buy them from him.  When he heard that I was giving them to St. John’s, he desired that I should not buy all, because he wished to give two of them himself to the College.  Accordingly, I bought only thirteen, and the remaining two, viz. no. 28, Leatherhead Church, and no. 59, Chiavenna, 1887, were given to St. John’s College by Alfred.

There are but few sketches or pictures by Butler between 1888 and 1896.  This is because his sketching was interrupted by his having to take up photography for the preparation of Ex Voto.  Almost before this book was published (1888) he had plunged into The Life and Letters of Dr. Butler, and in 1892 he added to his absorbing occupations the problem of the Odyssey.  Thus he had little leisure or energy for the labour of painting; and this labour was always great.  He could not leave his outline until he had got it right, and there was a perpetual chase after the changing shadows.  And when he had got the outline it was so constantly disappearing under the colour that he took to making “a careful outline on a separate sheet of paper”; this was to be kept, after he had traced the drawing on to the paper which was to receive the colour, and to be referred to continually while he proceeded.  When he met with the camera lucida, which he bought in Paris, and which is among the objects given to St. John’s, he thought his difficulties were solved and wrote to Miss Savage, 9 October, 1882: “I have got a new toy, a camera lucida, which does all the drawing for me, and am so pleased with it that I am wanting to use it continually.”  To which in 1901 he added this note: “What a lot of time I wasted over that camera lucida, to be sure!”  It did all the drawing for him, but it distorted the perspective so that the outlines of the many sketches which he produced with its help were a disappointment.

The camera lucida having failed, his hopes were next fixed upon photography, which, by rapidly and correctly recording anything he felt a desire to sketch, was to give him something from which he could afterwards construct a picture.  So he took an immense number of snap-shots, of which many are at St. John’s, but he never did anything with them.  Nos. 62 and 63, which were done by Sadler from Butler’s photographs, show how he would have proceeded if he had not had too many other things to do.

It was not until 1896, when The Life of Dr. Butler appeared, that he was able to return seriously to sketching, and by that time he was over sixty and too old to be burdened with the paraphernalia necessary for oils; he therefore confined himself to water-colours.

Some of the pictures in this list were included in the list in The Eagle, vol. xxxix., no. 175, March 1918, and the remainder in the succeeding number, June 1918.  In making the present catalogue I have corrected such errors and misprints as I noticed in The Eagle, and I have re-arranged and renumbered the items so as to make them run in chronological order.  I have also amplified some of the notes.  I have placed the sketches and drawings in order of date because to examine them in that order helps the spectator to realise the progress made by Butler in his artistic studies.

Butler went abroad with his family, his second visit to Italy, for the winter of 1853-4.  They travelled through Switzerland to Rome and Naples, starting in August 1853, and Butler thus missed the half-year at school.  I am sorry that I have not found any more finished drawing made by him on this occasion.

Reproduced in the Memoir, ch. iii.  On the back of this drawing is the beginning of a water-colour sketch.  It was in a book with others mentioned in the Memoir as having been given to Shrewsbury School (I. 44).  I have no doubt that the sketch on the back is by Butler, and represents part of the Rectory house at Langar.

The Rev. D. Y. Blakiston was born in 1832.  He studied art at the Royal Academy Schools especially under W. Dobson, R.A.  From about 1850 to 1865 he painted in London and at St. Leonard’s, and exhibited at the Royal Academy.  About 1865 he entered at Downing College, took Orders in 1869, and was presented to the living of East Grinstead in 1871, which he held till his retirement soon after 1908.  He died in 1914.  Throughout his life he made a practise of sketching his friends.  I suppose he must have met and sketched Butler on some occasion when Butler was in London staying with his cousins the Worsleys.  The artist’s son, the Rev....