The Sagebrusher A Story of the West 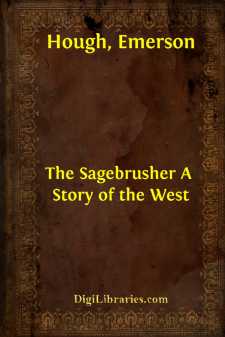 CHAPTER I SIM GAGE AT HOME

"Sim," said Wid Gardner, as he cast a frowning glance around him, "take it one way with another, and I expect this is a leetle the dirtiest place in the Two-Forks Valley."

The man accosted did no more than turn a mild blue eye toward the speaker and resume his whittling. He smiled faintly, with a sort of apology, as the other went on.

"I'll say more'n that, Sim. It's the blamedest, dirtiest hole in the whole state of Montany—yes, or in the whole wide world. Lookit!"

He swept a hand around, indicating the interior of the single-room log cabin in which they sat.

"Well," commented Sim Gage after a time, taking a meditative but wholly unagitated tobacco shot at the cook stove, "I ain't saying she is and I ain't saying she ain't. But I never did say I was a perfessional housekeeper, did I now?"

"Well, some folks has more sense of what's right, anyways," grumbled Wid Gardner, shifting his position on one of the two insecure cracker boxes which made the only chairs, and resting an elbow on the oil cloth table cover, where stood a few broken dishes, showing no signs of any ablution in all their hopeless lives. "My own self, I'm a bachelor man, too—been batching for twenty years, one place and another—but by God! Sim, this here is the human limit. Look at that bed."

He kicked a foot toward a heap of dirty fabrics which lay upon the floor, a bed which might once have been devised for a man, but long since had fallen below that rank. It had a breadth of dirty canvas thrown across it, from under which the occupant had crawled out. Beneath might be seen the edges of two or three worn and dirty cotton quilts and a pair of blankets of like dinginess. Below this lay a worn elk hide, and under all a lower-breadth of the over-lapping canvas. It was such a bed as primarily a cow-puncher might have had, but fallen into such condition that no cow camp would have tolerated it.

Sim Gage looked at the heap of bedding for a time gravely and carefully, as though trying to find some reason for his friend's dissatisfaction. His mouth began to work as it always did when he was engaged in some severe mental problem, but he frowned apologetically once more as he spoke.

"Well, Wid, I know, I know. It ain't maybe just the thing to sleep on the floor all the time, noways. You see, I got a bunk frame made for her over there, and it's all tight and strong—it was there when I took this cabin over from the Swede. But I ain't never just got around to moving my bed offen the floor onto the bedstead. I may do it some day. Fact is, I was just a-going to do it anyways."

"Just a-going to—like hell you was! You been a-going to move that bed for four years, to my certain knowledge, and I know that in that time you ain't shuk it out or aired it onct, or made it up."

"How do you know I ain't made her up?" demanded Sim Gage, his knife arrested in its labors.

"Well, I know you ain't. It's just the way you've throwed it ever' morning since I've knowed you here. Move it up on the bedstead?—First thing you know you can't."