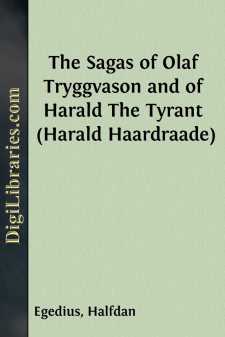 OW it befell in the days of King Tryggvi Olafson that the woman he had wedded was Astrid & she was the daughter of Eirik Biodaskalli, a wealthy man who dwelt at Oprostad. ¤ When the downfall of Tryggvi had been accomplished, Astrid fled away bearing with her what chattels she might. And with her went her foster-father Thorolf Louse-Beard, who never left her, whereas other trusty men, loyal to her, fared hither and thither to gather tidings of her foes or to spy out where they might lurk. Now Astrid being great with child of King Tryggvi caused herself to be transported to an islet on a lake & there took shelter with but few of her company. ¤ In due time she bare a man-child, and at his baptism he was called Olaf after his father’s father. All that summer did she abide there in hiding. But when the nights grew as long as they were dark and the weather waxed cold, she set forth once more and with her fared Thorolf and the others of her train. Only by night could they venture in those parts of the country that were inhabited being in fear lest they should be seen of men or meet with them. In time, at even, came they to the homestead of Eirik of Oprostad. And since they were journeying by stealth, Astrid sent a messenger to the goodman of the house, who bade them to be led to an outhouse & there had set before them the best of cheer. Thence, when Astrid had abided for a while, her followers went unto their homes, but she remained there & with her to bear her company were two women, her babe Olaf, Thorolf Louse-Beard and his son Thorgills who was six winters old. They rested in that place until the winter was done.

¶ After they had made an end to slaying Tryggvi Olafson, Harald Grey-Cloak and Gudrod his brother hied them to the homesteads that had been his. But ere they came thither Astrid had fled & of her learned they no tidings save a rumour that she was with child of King Tryggvi. ¤ In the autumn fared they to the north, as has been related beforetime, and when they were face to face with their mother Gunnhild, told they her all that had befallen them on their journey. Closely did she question them concerning Astrid, and they imparted to her what they had heard. But because the sons of Gunnhild were that same autumn and the next winter at strife with Earl Hakon, as hath already ere now been set forth, made they no search for Astrid and her son.

¶ When the spring was come, Gunnhild despatched spies to the Uplands, and even as far as Vik, to get news of Astrid. And when the spies returned it was with the tidings that she was with her father Eirik & there most like was she rearing the son that she had borne to King Tryggvi that was dead. Forthwith Gunnhild chose messengers and equipped them handsomely both with weapons and wearing apparel: thirty men chose she, and their leader was Hakon, a man of influence and a friend to herself. She bade them make their way to Oprostad to Eirik and from thence take the son of Tryggvi and bring him unto herself....