The Russian Revolution; the Jugo-Slav Movement 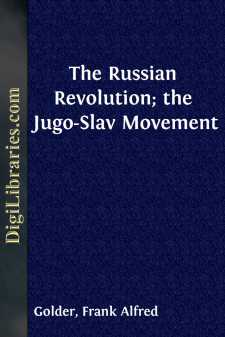 In an interview dated November 21, and published in the New York Times in a special cable from Petrograd, Leon Trotzky in defending the attitude of the people toward the Bolsheviki coup d'etat is reported to have said substantially the following: "All the bourgeoisie is against us. The greater part of the intellectuals is against us or hesitating, awaiting a final outcome. The working class is wholly with us. The army is with us. The peasants, with the exception of exploiters, are with us. The Workmen's and Soldiers' government is a government of workingmen, soldiers, and peasants against the capitalists and landowners."

On the other hand my father, Ivan Petrunkevitch, floorleader of the Constitutional Democratic party in the first Duma and since that time owner and publisher of the Petrograd daily Rech writes in a private letter dated June 12: "... the present real government, i. e., the Council of Soldiers' and Workmen's Deputies, whose leaders are neither soldiers nor workmen, but intellectuals, etc." Nothing has happened during the months intervening between the letter and the interview to change the composition of the Council appreciably. It is true that Kerensky who was vice-president of the Council has been meanwhile deposed; that Tshcheidze had to relinquish the presidency in the Council to Trotzky long before Kerensky's downfall; but the leaders of the Council still are intellectuals, are well educated men, some of them well known writers on political and economic questions and withal very different from the masses which they lead and which they purport to represent. In justice to those who had to give way to the Lenine-Trotzky crowd of supporters, I wish to state emphatically that I do not want to put them on the same plane. Tseretelli, Plekhanov, Tshcheidze, and their co-workers are men of great courage, high ideals, and personal integrity. On the other hand their successors in power are men of a totally different type. The integrity of many of their number has been openly questioned, the accusations, published & broadcast, remained unanswered, and no suit for libel was brought by the men thus accused. Lenine was put under suspicion of having accepted German help and of having planned with Germany's agents the disorganization of the Russian army. It has been even charged on apparently good evidence that the leaflets distributed at the front were printed with German money. Trotzky was accused by Miliukov in the Rech (June 7) of having received $10,000 from German-Americans for the purpose of organizing the attack on Kerensky's government. Ganetsky was forced to leave Denmark by an order of the Danish government, having been convicted of dishonest dealings in a Danish court. Zinoviev is accused of forgery. Others are also under suspicion which has been only increased by the arrest and imprisonment of Burtzev who is known for his untiring efforts to hunt down traitors to the cause of the Russian Revolution and who had important evidence in his possession....