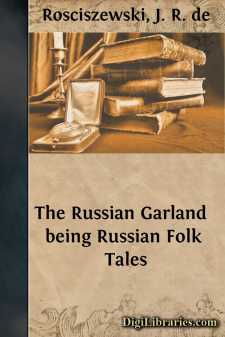 The special interest of this volume of Russian Folk Tales is that it is a translation from a collection of peasant Chap-books of all sorts made in Moscow about 1830, long before the Censorship had in great measure stopped the growth of popular literature. It is not necessary to dilate upon the peculiarities of Chap-books and their methods: in the conditions of their existence many of the finest qualities of the primitive stories are eliminated, but on the other hand certain essentials are enforced. The story must be direct, the interest sustained, and the language however fine, simple and easily understood.

It is to be hoped that some of these merits have been preserved in this translation: for this book is intended to appeal to a class of severe and incorruptible critics—the children of to-day. To older critics the matter is also interesting. Who on earth would ever expect to find in a Russian Chap-book printed in Slavonic type on a coarse broadside sheet the Provençal legend of “Pierre et Maguelonne” or the Old English tale of “Bevis of Hampton.” And the mystery deepens when one is told that Bevis of Hampton is ages old in Russia, however the names have been re-furbished by the printer to—not the English, but—the Italian form. Some of the tales are evidently of German origin—adopted and made Russian, like that of the “Seven Simeons” or “Emelyan, the Fool”; others are as evidently Eastern. A few date from the Russian Epics, like that of “Iliya of Murom” and “Ivan the Peasant’s Son”; others are of later date, like that of “The Judgment of Shemyaka,” who was a historic character who lived about 1446.

It is hardly necessary to dilate on the peculiar expressions here to be found; how that a child grows “not day by day, but hour by hour,” how that when the Tsar wants to drink “beer is not brewed nor brandy distilled,” seeing he is served at once, how the hero passes through “thrice nine lands to the thirtieth country,” how brothers are always in threes, and how the youngest always succeeds where his elders fail. Students of folklore will know all about them, and the rest of us must take them on trust. Do you know why you must never go under a ladder?

STORY OF LYUBIM TSAREVICH AND THE WINGED WOLF

IN a certain country there once lived a Tsar named Elidarovich, with his wife, Militissa Ibrahimovna, who had three sons. The eldest son was named Aksof Tsarevich, the second Hut Tsarevich, and the youngest, Lyubim Tsarevich; and they grew, not from day to day, but from hour to hour. And when the eldest son was twenty years of age, he begged leave of his parents to travel in other countries, and seek a beautiful princess for his wife. So his parents at last consented, gave him their blessing, and dismissed him to the four quarters of the earth.

Not long after this, Hut Tsarevich in like manner begged permission of his parents to travel; and Tsar Elidar and the Tsarina gave their consent with the greatest pleasure....