The Rules of the Game 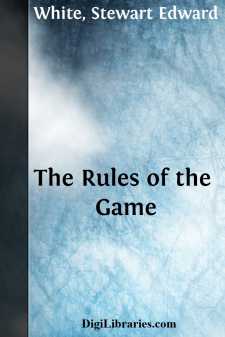 Late one fall afternoon, in the year 1898, a train paused for a moment before crossing a bridge over a river. From it descended a heavy-set, elderly man. The train immediately proceeded on its way.

The heavy-set man looked about him. The river and the bottom-land growths of willow and hardwood were hemmed in, as far as he could see, by low-wooded hills. Only the railroad bridge, the steep embankment of the right-of-way, and a small, painted, windowless structure next the water met his eye as the handiwork of man. The windowless structure was bleak, deserted and obviously locked by a strong padlock and hasp. Nevertheless, the man, throwing on his shoulder a canvas duffle-bag with handles, made his way down the steep railway embankment, across a plank over the ditch, and to the edge of the water. Here he dropped his bag heavily, and looked about him with an air of comical dismay.

The man was probably close to sixty years of age, but florid and vigorous. His body was heavy and round; but so were his arms and legs. An otherwise absolutely unprepossessing face was rendered most attractive by a pair of twinkling, humorous blue eyes, set far apart. Iron-gray hair, with a tendency to curl upward at the ends, escaped from under his hat. His movements were slow and large and purposeful.

He rattled the padlock on the boathouse, looked at his watch, and sat down on his duffle-bag. The wind blew strong up the river; the baring branches of the willows whipped loose their yellow leaves. A dull, leaden light stole up from the east as the afternoon sun lost its strength.

By the end of ten minutes, however, the wind carried with it the creak of rowlocks. A moment later a light, flat duck-boat shot around the bend and drew up at the float.

"Well, Orde, you confounded old scallywattamus," remarked the man on the duffle-bag, without moving, "is this your notion of meeting a train?"

The oarsman moored his frail craft and stepped to the float. He was about ten years the other's junior, big of frame, tanned of skin, clear of eye, and also purposeful of movement.

"This boathouse," he remarked incisively, "is the property of the Maple County Duck Club. Trespassers will be prosecuted. Get off this float."

Then they clasped hands and looked at each other.

"It's surely like old times to see you again, Welton," Orde broke the momentary silence. "It's been—let's see—fifteen years, hasn't it? How's Minnesota?"

"Full of ducks," stated Welton emphatically, "and if you haven't anything but mud hens and hell divers here, I'm going to sue you for getting me here under false pretences. I want ducks."

"Well, I'll get the keeper to shoot you some," replied Orde, soothingly, "or you can come out and see me kill 'em if you'll sit quiet and not rock the boat. Climb aboard. It's getting late."

Welton threw aboard his duffle-bag, and, with a dexterity marvellous in one apparently so unwieldy, stepped in astern. Orde grinned.

"Haven't forgotten how to ride a log, I reckon?" he commented....