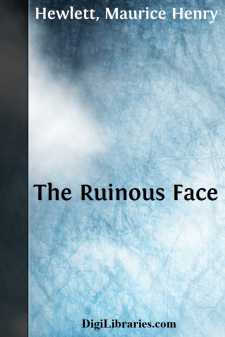 When the siege of Troy had been ten years doing, and most of the chieftains were dead, both of those afield and those who held the walls; and some had departed in their ships, and all who remained were leaden-hearted; there was one who felt the rage of war insatiate in his bowels: Menelaus, yellow-haired King of the Argives. He, indeed, rested not day or night, but knew the fever fretting at his members, and the burning in his heart. And when he scanned the windy plain about the city, and the desolation of it; and when he saw the huts of the Achæans, and the furrows where the chariots ploughed along the lines, and the charred places of camp-fires, smoke-blackened trees, and puddled waters of Scamander, and corn-lands and pastures which for ten years had known neither plough nor deep-breathed cattle, nor querulous sheep; even then in the heart of Menelaus was no pity for Dardan nor Greek, but only for himself and what he had lost—white-bosomed Helen, darling of Gods and men, and golden treasure of the house.

The vision of her glowing face and veiled eyes came to him in the night-season to make him mad, and in dreams he saw her, as once and many times he had seen her, lie supine. There as she lay in his dream, all white and gold, thinner than the mist-wreath upon a mountain, he would cry aloud for his loss, and throw his arms out over the empty bed, and feel his eye-sockets smart for lack of tears; for tears came not to him, but his fever made his skin quite dry, and so were his eyes dry. Therefore, when the chiefs of the Achæans in Council, seeing how their strength was wearing down like a snowbank under the sun, looked reproachfully upon him, and thought of Hector slain, and of dead Achilles who slew him, of Priam, and of Diomede, and of tall Patroclus, he, Menelaus, took no heed at all, but sat in his place, and said, "There is no mercy for robbers of the house. Starve whom we cannot put to the sword. Lay closer leaguer. So shall I win my wife again and have honor among the Kings, my fellows." So he spake, for it was so he thought day and night; and Agamemnon, King of Men, bore with him, and carried the voices of all the Achæans. For since the death of Achilles there was no man stout enough to gainsay him, or deny him anything.

In those days there was little war, since every man outside the walls was sick of strife, and consumed with longing for his home, and wife and children there. And one told another, "My son will be a grown man in his first beard," and one, "My daughter will be a wife." As for the men of Troy, it was well for them that their foes were spent; for Hector was dead, and Agenor, and Troilus; and King Priam, the old, was fallen into dotage, which deprived him of counsel. He loved Alexandros only, whom men called Paris. On which account Æneas, the wise prince, stood apart, and kept himself within the walls of his house. There remained only that beauteous Paris, the ravisher. Him Helen held fast enchained by her white arms and slow, sweet smile, and by the shafts of light from her kind eyes....