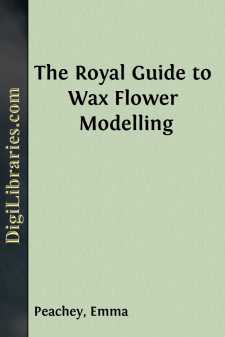 The Editor of this work, by Her Majesty's Artiste, Mrs. Peachey, fairly entitled the Royal Guide to Wax Flower Modelling, would fain leave the introduction, written by the same hand which rivals nature in her varying adornments, to unfold its historic, its poetic, its moral, and its suggestive graces—for it combines these; but having accepted the part, without which, since the days of Plato, no book is deemed complete, he essays a few prefatory observations and remarks.

Brevity, it has been said, is the soul of wit; but we may be brief when we know what is to follow, and for whom the following pages are designed.

Our fair readers will intuitively perceive that the scope of the instructive portion of this self-commending little volume is to facilitate their acquisition of an accomplishment at once royal and feminine in its origin and progress, and therefore worthy of their attention.

This elegant art requires but the fairy touch of a delicate hand to fill each available space in the chamber or drawing-room with the most perfect and beautiful imitations of the flower-garden.

"The morning flowers display their sweets,And gay their silken leaves unfold,As careless of the noontide heats,As fearless of the winter cold. "Nipped by the wind's unkindly blast,Parched by the sun's directer ray,The momentary glories waste,The short-lived beauties die away."

Unaffected by change or climate, wax flower modelling perpetuates the transient glories of the floral seasons; places all the tender varieties under the immediate glance of the ever gratified eye of the artist, who can thus in the depth of winter exhibit to an admiring foreign guest the exotics of the far hemisphere, or the indigenous plants of her own loved land.

Who that has watched by the side of an invalid mother, would not feel an exalted pleasure in creating around her the magical representations of those flowerets and rosebuds her maternal hand was wont to rear? Who, in such a moment of ministering affection, would not feel how sweet the reward of a father's love, as his approving gaze spoke more than many words his thanks to the duteous child returning the early care of the fond partner of his griefs and joys? Contemplating such a scene as this, one cannot refrain from citing the language of the poet:—

"O! if there be a tear,From passion's dross refined and clear;A tear so limpid and so meek,It would not stain an angel's cheek;'Tis that which pious fathers shedUpon a duteous daughter's head."

The copious table of contents possesses great attraction for persons of refined taste, embracing every variety of flower usually modelled in wax: its arrangement is calculated to lead the learner, by easy steps, from the most simple to the most elaborate accomplishment of a very delightful task.

The sketch of her artistic life, with which the talented though unpretending authoress has favoured the public, cannot fail to prove useful and encouraging to the beginner, as it fully justifies the good old proverb, that "where there is a will, there is a way;" and that way is clearly and forcibly pointed out in the Royal Guide, so as to direct with perfect ease the willing fingers of the modeller to the attainment of her object, to excel in giving form and substance to her innate perceptions of the beautiful....