The Rover Boys in Camp or, The Rivals of Pine Island 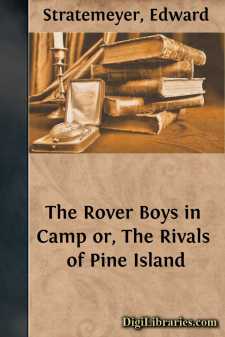 CHAPTER I THE ROVER BOYS AT HOME

"All out for Oak Run!" shouted the brakeman of the train, as he thrust his head in through the doorway of the car. "Step lively, please!"

"Hurrah for home!" shouted a curly-headed youth of sixteen, as he caught up a small dress-suit case. "Come on, Sam."

"Here I am," replied Dick Rover, the big brother of the others. "Just been in the baggage car, making sure the trunks would be put off," he added. "Say, but this looks natural, doesn't it, after traveling thousands of miles across the Pacific?"

"And across the Continent from San Francisco," put in Sam Rover.

"It's what we've gone through with that makes you feel that way, Sam," came from Tom Rover. "Just think of being cast away on a lonely island like Robinson Crusoe! Why, half the folks won't believe our story when they hear it."

"They'll have to believe it." Sam hopped down to the depot platform, followed by the others. "Wonder if the folks got that telegram I forwarded from Buffalo?"

"They must have, for there is Jack with the big carriage," said Tom, and walked over to the turnout he mentioned. "Hullo, Jack!" he called out. "How is everybody?"

"Master Tom!" ejaculated Jack Ness, the Rovers' hired man. "Back at last, are you, an' safe an' sound?"

"Sound as a dollar, Jack. How are the folks?"

"Your father is putty well, and so is your Uncle Randolph. Your Aunt Martha got so excited a-thinkin' you was coming hum she got a headache."

"Dear Aunt Martha!" murmured Tom. "I'll soon cure her of that." He turned to his brothers. "What shall we do about the trunks? We can't take 'em in the carriage."

"Aleck is comin' for them boxes," said the hired man. "There's his wagon now."

A box wagon came dashing up to the depot platform, with a tall, good-looking colored man on the seat. The eyes of the colored man lit up with pleasure when he caught sight of the boys.

"Well! well! well!" he ejaculated, leaping down and rushing forward. "Heah yo' are at las', bless you! I'se been dat worried 'bout yo' I couldn't 'most sleep fo' t'ree nights. An' jess to t'ink yo' was cast away on an island in de middle of dat Pacific Ocean! It's a wonder dem cannonballs didn't eat yo' up."

"Thanks, but we didn't meet any 'cannonballs,' Aleck, I am thankful to say," replied Dick Rover. "Our greatest trouble was with some mutineers who got drunk and wanted to run things to suit themselves. They might have got the best of us, but a warship visited the island just in the nick of time and rescued us."

"So I heared out ob dat letter wot yo' writ yo' father. An' to t'ink dat Miss Dora Stanhope and de Laning gals was wrecked wid yo'! It's wonderful!"

"It certainly was strange, Aleck. But, come, I am anxious to get home.Here are the trunk checks," and Dick passed the brasses over.

In a moment more the three boys had entered the carriage, along withJack Ness. Tom insisted on driving, and away they went at a spankinggait, over Swift River, through the little village of Dexter'sCorners, and then out on the road that led to Valley Brook farm....