The Rover Boys at College Or, The Right Road and the Wrong 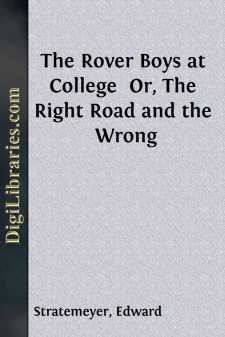 CHAPTER I ON THE TRAIN

"Making time?" repeated Tom Rover as he gazed out of the car window at the telegraph poles flashing past. "I should say we were, Sam! Why, we must be running sixty miles an hour!"

"If we are not we are making pretty close to it," came from a third boy of the party in the parlor car. "I think the engineer is trying to make up some of the time we lost at the last stop."

"That must be it, Dick," said Sam Rover. "Gracious, how we are rocking!" he added as the train rushed around a sharp curve and nearly threw him from his chair.

"I hope we get to Ashton on time," remarked Tom Rover. "I want to take a look around the grounds before it gets dark."

"That's Tom, wanting to see it all before he sleeps!" cried Sam Rover with a grin. "You look out, Tom, that you don't get into disgrace the first thing, as you did when we went to Putnam Hall Don't you remember that giant firecracker, and how Josiah Crabtree locked you up in a cell for setting it off?"

"Ugh! Will I ever forget it!" groaned Tom, making a wry face. "But I got the best of old Crabtree, didn't I?" he continued, his face brightening.

"Wonder if we'll make as many friends at college as we did at PutnamHall," remarked Dick Rover. "Those were jolly times and no mistake!Think of the feasts, and the hazings, and the baseball and football,and the rackets with the Pornell students, and all that!"

"Speaking of hazing, I heard that some of the hazing at the college we're bound for is fierce," came from Sam Rover.

"Well, we'll have to stand for what comes, Sam," answered his big brother. "No crying quit' here."

"Right you are, Dick," said Tom, "At the same time ifвЂ”Great Caesar's ghost, what's up now!"

As Tom uttered the last words a shrill whistle from the locomotive pierced the air. Then came the sudden gripping of the air brakes on the car wheels, and the express came to a stop with a shock that pitched all the passengers from their seats. Tom and Sam went sprawling in a heap in the aisle and Dick came down on top of them.

"Hi, get off of me!" spluttered Sam, who was underneath.

"What's the matter? Have we run into another train?" asked Tom as he pushed Dick to one side and arose.

"I don't know," answered the older brother. "Something is wrong, that's certain."

"Are you hurt, Sam?" asked Tom as he helped the youngest Rover to his feet.

"NoвЂ”not much," was the panting reply. "Say, we stopped in a hurry all right, didn't we?"

With the shock had come loud cries from the other people in the car, and it was found that one young lady had fainted. Everybody wanted to know what was the matter, but nobody could answer the question. The colored porter ran to the platform and opened the vestibule door. Tom followed the man and so did Sam and Dick.

"Freight train ahead, off the track," announced Tom. "We ran into the last car."

"Let us go up front and see how bad it is," returned Dick. "Maybe this will tie us up here for hours."