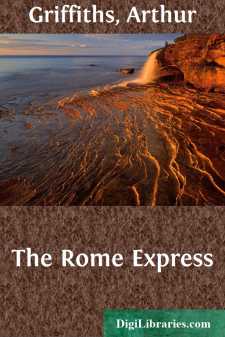 The Rome Express, the direttissimo, or most direct, was approaching Paris one morning in March, when it became known to the occupants of the sleeping-car that there was something amiss, very much amiss, in the car.

The train was travelling the last stage, between Laroche and Paris, a run of a hundred miles without a stop. It had halted at Laroche for early breakfast, and many, if not all the passengers, had turned out. Of those in the sleeping-car, seven in number, six had been seen in the restaurant, or about the platform; the seventh, a lady, had not stirred. All had reëntered their berths to sleep or doze when the train went on, but several were on the move as it neared Paris, taking their turn at the lavatory, calling for water, towels, making the usual stir of preparation as the end of a journey was at hand.

There were many calls for the porter, yet no porter appeared. At last the attendant was found—lazy villain!--asleep, snoring loudly, stertorously, in his little bunk at the end of the car. He was roused with difficulty, and set about his work in a dull, unwilling, lethargic way, which promised badly for his tips from those he was supposed to serve.

By degrees all the passengers got dressed, all but two,—the lady in 9 and 10, who had made no sign as yet; and the man who occupied alone a double berth next her, numbered 7 and 8.

As it was the porter's duty to call every one, and as he was anxious, like the rest of his class, to get rid of his travellers as soon as possible after arrival, he rapped at each of the two closed doors behind which people presumably still slept.

Again and again the porter knocked and called loudly. Still meeting with no response, he opened the door of the compartment and went in.

It was now broad daylight. No blind was down; indeed, the one narrow window was open, wide; and the whole of the interior of the compartment was plainly visible, all and everything in it.

The occupant lay on his bed motionless. Sound asleep? No, not merely asleep—the twisted unnatural lie of the limbs, the contorted legs, the one arm drooping listlessly but stiffly over the side of the berth, told of a deeper, more eternal sleep.

The man was dead. Dead—and not from natural causes.

One glance at the blood-stained bedclothes, one look at the gaping wound in the breast, at the battered, mangled face, told the terrible story.

It was murder! murder most foul! The victim had been stabbed to the heart.

With a wild, affrighted, cry the porter rushed out of the compartment, and to the eager questioning of all who crowded round him, he could only mutter in confused and trembling accents:

Thus the fact of the murder became known to every one by personal inspection, for every one (even the lady had appeared for just a moment) had looked in where the body lay. The compartment was filled for some ten minutes or more by an excited, gesticulating, polyglot mob of half a dozen, all talking at once in French, English, and Italian....