The Romanization of Roman Britain 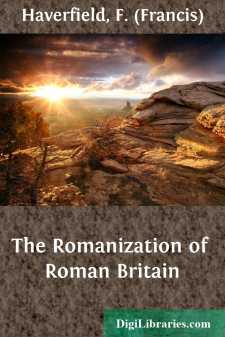 CHAPTER I THE ROMANIZATION OF THE EMPIRE

Historians seldom praise the Roman Empire. They regard it as a period of death and despotism, from which political freedom and creative genius and the energies of the speculative intellect were all alike excluded. There is, unquestionably, much truth in this judgement. The world of the Empire was indeed, as Mommsen has called it, an old world. Behind it lay the dreams and experiments, the self-convicted follies and disillusioned wisdom of many centuries. Before it lay no untravelled region such as revealed itself to our forefathers at the Renaissance or to our fathers fifty years ago. No new continent then rose up beyond the western seas. No forgotten literature suddenly flashed out its long-lost splendours. No vast discoveries of science transformed the universe and the interpretation of it. The inventive freshness and intellectual confidence that are born of such things were denied to the Empire. Its temperament was neither artistic, nor literary, nor scientific. It was merely practical.

Yet if practical, it was not therefore uncreative. In its own sphere of everyday life, it was an epoch of growth in many directions. Even the arts moved forward. Sculpture was enriched by a new and noble style of portraiture. Architecture won new possibilities by the engineering genius which reared the aqueduct of Segovia and the Basilica of Maxentius.[1] But these are only practical expansions of arts that are in themselves unpractical. The greatest work of the imperial age must be sought in its provincial administration. The significance of this we have come to understand, as not even Gibbon understood it, through the researches of Mommsen. By his vast labours our horizon has broadened beyond the backstairs of the Palace and the benches of the Senate House in Rome to the wide lands north and east and south of the Mediterranean, and we have begun to realize the true achievements of the Empire. The old theory of an age of despotism and decay has been overthrown, and the believer in human nature can now feel confident that, whatever their limitations, the men of the Empire wrought for the betterment and the happiness of the world.

Their efforts took two forms, the organization of the frontier defences which repulsed the barbarian, and the development of the provinces within those defences. The first of these achievements was but for a time. In the end the Roman legionary went down before the Gothic horseman. But before he fell he had done his work. In the lands that he had sheltered, Roman civilization had taken strong root. The fact has an importance which we to-day might easily miss. It is not likely that any modern nation will soon again stand in the place that Rome then held. Our culture to-day seems firmly planted in three continents and our task is rather to diffuse it further and to develop its good qualities than to defend it. But the Roman Empire was the civilized world; the safety of Rome was the safety of all civilization....