The Romance of Words (4th ed.) 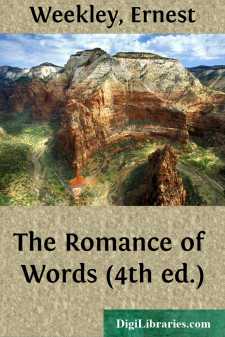 A long and somewhat varied experience in language teaching has convinced me that there are still, in spite of the march of science, many people who are capable of getting intellectual pleasure from word-history. I hope that to such people this little book, the amusement of occasional leisure, will not be unwelcome. It differs, I believe, from any other popular book on language in that it deals essentially with the origins of words, and makes no attempt to enforce a moral. My aim has been to select especially the unexpected in etymology, "things not generally known," such as the fact that Tammany was an Indian chief, that assegai occurs in Chaucer, that jilt is identical with Juliet, that brazil wood is not named from Brazil, that to curry favour means to comb down a horse of a particular colour, and so forth. The treatment is made as simple as possible, a bowing acquaintance with Latin and French being all that is assumed, though words from many other languages are necessarily included. In the case of each word I have traced the history just so far back as it is likely to be of interest to the reader who is not a philological specialist.

I have endeavoured to state each proposition in its simplest terms, without enumerating all the reservations and indirect factors which belong to the history of almost every word.

The chapter headings only indicate in a general way the division of the subject matter, the arrangement of which has been determined rather by the natural association which exists between words. The quotations are, with few exceptions, drawn from my own reading. They come from very varied sources, but archaic words are exemplified, when possible, from authors easily accessible, generally Shakespeare or Milton, or, for revived archaisms, Scott. In illustrating obsolete meanings I have made much use of the earliest dictionaries available.

It seemed undesirable to load a small work of this kind with references. The writer on word-lore must of necessity build on what has already been done, happy if he can add a few bricks to the edifice. But philologists will recognise that this book is not, in the etymological sense, a mere compilation, and that a considerable portion of the information it contains is here printed for the first time in a form accessible to the general reader. , on Semantics, is, so far as I know, the first attempt at a simple treatment of a science which is now admitted to an equality with phonetics, and which to most people is much more interesting.

Throughout I have used the New English Dictionary, in the etymological part of which I have for some years had a humble share, for purposes of verification. Without the materials furnished by the historical method of that great national work, which is now complete from A to R, this book would not have been attempted. For words in S to Z, I have referred chiefly to Professor Skeat's Etymological Dictionary (4th ed., Oxford, 1910).

It is not many years since what passed for etymology in this country was merely a congeries of wild guesses and manufactured anecdotes....