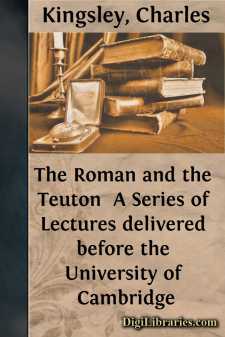 Never shall I forget the moment when for the last time I gazed upon the manly features of Charles Kingsley, features which Death had rendered calm, grand, sublime.  The constant struggle that in life seemed to allow no rest to his expression, the spirit, like a caged lion, shaking the bars of his prison, the mind striving for utterance, the soul wearying for loving response,—all that was over.  There remained only the satisfied expression of triumph and peace, as of a soldier who had fought a good fight, and who, while sinking into the stillness of the slumber of death, listens to the distant sounds of music and to the shouts of victory.  One saw the ideal man, as Nature had meant him to be, and one felt that there is no greater sculptor than Death.

As one looked on that marble statue which only some weeks ago had so warmly pressed one’s hand, his whole life flashed through one’s thoughts.  One remembered the young curate and the Saint’s Tragedy; the chartist parson and Alton Locke; the happy poet and the Sands of Dee; the brilliant novel-writer and Hypatia and Westward-Ho; the Rector of Eversley and his Village Sermons; the beloved professor at Cambridge, the busy canon at Chester, the powerful preacher in Westminster Abbey.  One thought of him by the Berkshire chalk-streams and on the Devonshire coast, watching the beauty and wisdom of Nature, reading her solemn lessons, chuckling too over her inimitable fun.  One saw him in town-alleys, preaching the Gospel of godliness and cleanliness, while smoking his pipe with soldiers and navvies.  One heard him in drawing-rooms, listened to with patient silence, till one of his vigorous or quaint speeches bounded forth, never to be forgotten.  How children delighted in him!  How young, wild men believed in him, and obeyed him too!  How women were captivated by his chivalry, older men by his genuine humility and sympathy!

All that was now passing away—was gone.  But as one looked on him for the last time on earth, one felt that greater than the curate, the poet, the professor, the canon, had been the man himself, with his warm heart, his honest purposes, his trust in his friends, his readiness to spend himself, his chivalry and humility, worthy of a better age.

Of all this the world knew little;—yet few men excited wider and stronger sympathies.

Who can forget that funeral on the 28th Jan., 1875, and the large sad throng that gathered round his grave?  There was the representative of the Prince of Wales, and close by the gipsies of the Eversley common, who used to call him their Patrico-rai, their Priest-King.  There was the old Squire of his village, and the labourers, young and old, to whom he had been a friend and a father.  There were Governors of distant Colonies, officers, and sailors, the Bishop of his diocese, and the Dean of his abbey; there were the leading Nonconformists of the neighbourhood, and his own devoted curates, Peers and Members of the House of Commons, authors and publishers; and outside the church-yard, the horses and the hounds and the huntsman in pink, for though as good a clergyman as any, Charles Kingsley had been a good sportsman too, and had taken in his life many a fence as bravely as he took the last fence of all, without fear or trembling.  All that he had loved, and all that had loved him was there, and few eyes were dry when he was laid in his own yellow gravel bed, the old trees which he had planted and cared for waving their branches to him for the last time, and the grey sunny sky looking down with calm pity on the deserted rectory, and on the short joys and the shorter sufferings of mortal men....