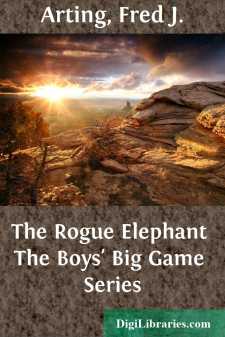 "You are so crazy as a loon! Boys? Boys to such a drip dake? Nein!"

Von Hofe excitedly pounded the table until the attendants at the Explorers' Club stared. Then he leaned back determinedly and lighted his meerschaum. The lean, bronzed man who sat opposite pushed away his maps with a smile.

"You misunderstand, von Hofe. I know both these boys personally and vouch for them. You have agreed that this is to be no milk-and-water trip, with hundreds of porters bearing bath tubs and toilet water, but that we shall live off the land as we go. That right?"

The German nodded amid a cloud of smoke.

"You want me to take you into the elephant country and shoot your specimens. I have agreed to do this. I know Africa and I can do it. You are paying the expenses of the trip, but that is immaterial. If we hitch up, von Hofe, it will be on the understanding that I am in command of this expedition; that I choose those I want to go along, and that you are with me to prepare your specimens and nothing else. Now you can take it or leave it—that's final."

The elderly German paused before replying, the two men searching each other's faces quietly. As most people have it, the famous Dr. Gross von Hofe was a "taxidermist." The average "stuffer," the man who simply covers and replaces the bones of the specimen with excelsior or cotton, is properly named taxidermist, but von Hofe was an artist, known the world over for his wonderful work. In various museums of the world you may see his models, signed like the masterpieces of other artists, of rare and disappearing animals from the distant quarters of the earth, frozen in action, with the setting of the trees, grass, sand or water of their native haunts.

The other, somewhat younger than the famous artist in skin and bone, was an American of German descent—Louis Schoverling. He was one of that little class of world-wanderers, who have barely enough money to carry them about the earth's strange places, hunting and exploring, gradually pushing the frontier of civilization back into the savage quarters of the world, and most happy when self-dependent and forced to rely on gun or hook for a day's meal.

So when Dr. von Hofe was commissioned by two celebrated museums to visit East Africa and secure for each a family group of elephants—tusker bull, calf, and cow—it was natural that he should come to the New York Explorers' Club for a helper and guide. There he had picked on Louis Schoverling—or "the General," as his fellow-explorers had laughingly dubbed him after the failure of a certain South American revolution—to take him to the tuskers. Dr. von Hofe was not a hunter and he knew it. So Schoverling had agreed to go, not for the money in the trip, but for the excitement of it.

"I see," returned the big German at last, "why your comrades call you 'the General.' You are right. You shall take whom you like, und if I say you are crazy as a loon, it makes no difference. You are satisfied?"

"Quite," laughed the American. "When do we start?"

"Three weeks from to-day," returned the other, whose English was perfect save in moments of excitement....