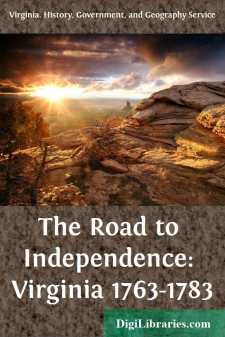 This publication was prepared to assist teachers in developing topics of study relating to the American Revolution and Virginia's role in the winning of independence and to help students develop deeper appreciation for the rich heritage that is theirs as citizens of the Commonwealth. The Virginia tradition was created by responsible men and women who believed in the inherent dignity of the individual, the role of government as a servant of the people, the value of freedom, justice, equality, and the concept of "rule of law." These ideals and beliefs remain the hallmark of Virginia and the nation.

Important objectives of this publication are:

To emphasize the study of Virginia history during the period from 1763 to 1783 when the state exerted influential leadership and wisdom in the winning of American independence;

To develop a deeper understanding of the meaning of freedom and basic principles and traditions which have nourished and sustained the American way of life;

To further the students' understanding of individual rights and responsibilities in a free society;

To further acquaint students with their heritage of freedom and the importance of perpetuating democratic traditions; and

To further students' understanding of the concept of self-government and the American way of life.

It is hoped that this publication will assist in achieving these objectives.

1763: The Aftermath of Victory

Virginia in 1763 appeared to stand on the edge of a new era of greatness. The Peace of Paris signed that year confirmed the total victory of the British in North America during the long French and Indian War (1754-1763). Virginia's natural enemies were subdued: the French were driven from Canada, the Forks of the Ohio, the Illinois Country, and Louisiana; the Spanish were forced to give up Florida; and the Indians, now without any allies, were defeated or banished beyond the Appalachians. Virginians were free to continue their remarkable growth of the past 40 years during which they had left the Tidewater, pushed up the James, Rappahannock, Appomattox, and Potomac river basins, and joined thousands of Scotch-Irish and Germans pushing southward out of Pennsylvania into the Valley of Virginia. Although they were halted temporarily in 1755 when Braddock's disastrous defeat in Pennsylvania and the massacre of frontier pioneer James Patton at Draper's Meadow (Blacksburg) encouraged the Indians to resist the white man's advance, Virginians eagerly eyed the lands in southwestern Virginia along the Holston, Clinch, and French Lick Rivers and those that lay beyond the mountains along the Ohio....