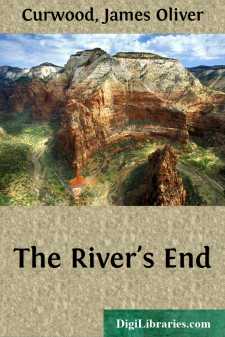 THE RIVER'S END I

Between Conniston, of His Majesty's Royal Northwest Mounted Police, and Keith, the outlaw, there was a striking physical and facial resemblance. Both had observed it, of course. It gave them a sort of confidence in each other. Between them it hovered in a subtle and unanalyzed presence that was constantly suggesting to Conniston a line of action that would have made him a traitor to his oath of duty. For nearly a month he had crushed down the whispered temptings of this thing between them. He represented the law. He was the law. For twenty-seven months he had followed Keith, and always there had been in his mind that parting injunction of the splendid service of which he was a part—"Don't come back until you get your man, dead or alive." Otherwise—

A racking cough split in upon his thoughts. He sat up on the edge of the cot, and at the gasping cry of pain that came with the red stain of blood on his lips Keith went to him and with a strong arm supported his shoulders. He said nothing, and after a moment Conniston wiped the stain away and laughed softly, even before the shadow of pain had faded from his eyes. One of his hands rested on a wrist that still bore the ring-mark of a handcuff. The sight of it brought him back to grim reality. After all, fate was playing whimsically as well as tragically with their destinies.

His fingers closed over the manacle-marked wrist.

Over their heads the arctic storm was crashing in a mighty fury, as if striving to beat down the little cabin that had dared to rear itself in the dun-gray emptiness at the top of the world, eight hundred miles from civilization. There were curious waitings, strange screeching sounds, and heart-breaking meanings in its strife, and when at last its passion died away and there followed a strange quiet, the two men could feel the frozen earth under their feet shiver with the rumbling reverberations of the crashing and breaking fields of ice out in Hudson's Bay. With it came a dull and steady roar, like the incessant rumble of a far battle, broken now and then—when an ice mountain split asunder—with a report like that of a sixteen-inch gun. Down through the Roes Welcome into Hudson's Bay countless billions of tons of ice were rending their way like Hunnish armies in the break-up.

Conniston, instead, rose slowly to his feet and went to a table on which a seal-oil lamp was burning. He swayed a little as he walked. He sat down, and Keith seated himself opposite him. Between them lay a worn deck of cards. As Conniston fumbled them in his fingers, he looked straight across at Keith and grinned.

"It's queer, devilish queer," he said.

"Don't you think so, Keith?" He was an Englishman, and his blue eyes shone with a grim, cold humor. "And funny," he added.

"Yes, it is funny," maintained Conniston. "Just twenty-seven months ago, lacking three days, I was sent out to get you, Keith....