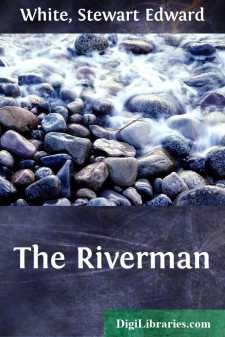 The time was the year 1872, and the place a bend in the river above a long pond terminating in a dam. Beyond this dam, and on a flat lower than it, stood a two-story mill structure. Save for a small, stump-dotted clearing, and the road that led from it, all else was forest. Here in the bottom-lands, following the course of the stream, the hardwoods grew dense, their uppermost branches just beginning to spray out in the first green of spring. Farther back, where the higher lands arose from the swamp, could be discerned the graceful frond of white pines and hemlock, and the sturdy tops of Norways and spruce.

A strong wind blew up the length of the pond. It ruffled the surface of the water, swooping down in fan-shaped, scurrying cat's-paws, turning the dark-blue surface as one turns the nap of velvet. At the upper end of the pond it even succeeded in raising quite respectable wavelets, which LAP LAP LAPPED eagerly against a barrier of floating logs that filled completely the mouth of the inlet river. And behind this barrier were other logs, and yet others, as far as the eye could see, so that the entire surface of the stream was carpeted by the brown timbers. A man could have walked down the middle of that river as down a highway.

On the bank, and in a small woods-opening, burned two fires, their smoke ducking and twisting under the buffeting of the wind. The first of these fires occupied a shallow trench dug for its accommodation, and was overarched by a rustic framework from which hung several pails, kettles, and pots. An injured-looking, chubby man in a battered brown derby hat moved here and there. He divided his time between the utensils and an indifferent youth—his "cookee." The other, and larger, fire centred a rectangle composed of tall racks, built of saplings and intended for the drying of clothes. Two large tents gleamed white among the trees.

About the drying-fire were gathered thirty-odd men. Some were half-reclining before the blaze; others sat in rows on logs drawn close for the purpose; still others squatted like Indians on their heels, their hands thrown forward to keep the balance. Nearly all were smoking pipes.

Every age was represented in this group, but young men predominated. All wore woollen trousers stuffed into leather boots reaching just to the knee. These boots were armed on the soles with rows of formidable sharp spikes or caulks, a half and sometimes even three quarters of an inch in length. The tight driver's shoe and "stagged" trousers had not then come into use. From the waist down these men wore all alike, as though in a uniform, the outward symbol of their calling. From the waist up was more latitude of personal taste. One young fellow sported a bright-coloured Mackinaw blanket jacket; another wore a red knit sash, with tasselled ends; a third's fancy ran to a bright bandana about his neck. Head-gear, too, covered wide variations of broader or narrower brim, of higher or lower crown; and the faces beneath those hats differed as everywhere the human countenance differs....