The Rival Heirs; being the Third and Last Chronicle of Aescendune

by A. D. (Augustine David) Crake 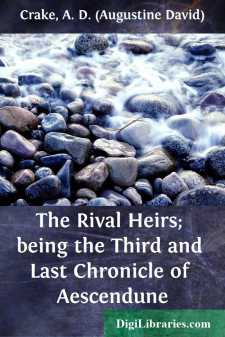 CHAPTER I. THE ANGLO-SAXON HALL.

It was the evening of Thursday, the fifth of October, in year of grace one thousand and sixty and six.

The setting sun was slowly sinking towards a dense bank of clouds, but as yet he gladdened the woods and hills around the old hall of Aescendune with his departing light.

The watchman on the tower gazed upon a fair scene outspread before him; at his feet rolled the river, broad and deep, spanned by a rude wooden bridge; behind him rose the hills, crowned with forest; on his right hand lay the lowly habitations of the tenantry, the farmhouses of the churls, the yet humbler dwellings of the thralls or tillers of the soil; the barns and stables were filled with the produce of a goodly harvest; the meadows full of sheep and oxen--a scene of rich pastoral beauty.

On his left hand a road led to the northeast, following at first the upward course of the river, until it left the stream and penetrated into the thick woodland.

Just as the orb of day was descending into the dense bank of cloud afore mentioned, the watchman marked the sheen of spear and lance, gilded by the departing rays, where the road left the forest. Immediately he blew the huge curved horn which he carried at his belt; and at the blast the inhabitants of the castle and village poured forth; loud shouts of joy rent the air--the deeper exclamations of the aged, the glad huzzas of children--and all hastened along the road to greet the coming warriors.

For well they knew that a glorious victory had gladdened the arms of old England; that at Stamford Bridge the proud Danes and Norwegians had sustained a crushing defeat, and been driven to seek refuge in their ships, and that these warriors, now approaching, were their own sons, husbands, or fathers, who had gone forth with Edmund, Thane of Aescendune, to fight under the royal banner of Harold, the hero king.

Who shall describe the meeting, the glad embraces, the half-delirious joy with which those home-bred soldiers were welcomed? No hirelings they, who fought for mere glory, or lust of gold, but husbands, fathers of families--men who had left the ploughshare and pruning hook to fight for hearth and altar.

"Home again"--home, saved from the fire and sword of the Northman, of whom tradition told so many dread stories--stories well known at Aescendune, where a young son of the then thane fifty years agone had died a martyr's death, pierced through and through by arrows, shot slowly to death because he would not save himself by denying his Lord {}.

At that dismal period the whole district had been devastated with fire and sword, and there were old men amongst the crowd who well remembered the destruction of the former hall and village by the ferocious Danes. And now God had heard their litanies: "From the fury of the Northmen, good Lord deliver us," and had averted the scourge through the stout battle-axes and valiant swords of these warrior peasants and their noble leaders, such as Edmund, son of Alfgar.

Amidst all this joy the Lady Winifred of Aescendune stood upon the steps of the great hall to receive her lord, fair as the lily, a true Englishwoman, a loving wife and tender mother....