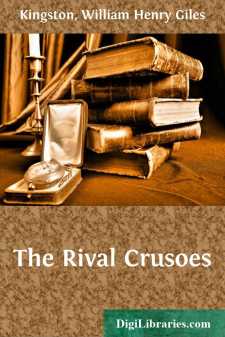 “I tell you what, Dick, if I was Farmer Hargrave I would not turn out to please Lord Elverston or any other lord in the land,” exclaimed Ben Rudall, as he stood hammering away at the side of his boat, which lay drawn up on the inner end of Hurst beach, near the little harbour of Keyhaven, on the Hampshire coast, at the western entrance of the Solent, opposite the Isle of Wight. His dress and weather-beaten countenance, as well as the work he was engaged on, showed that he was a seafaring man.

“But Mr Gooch the bailiff says there is a flaw, as he calls it, in the lease; but what that means I don’t know, except that it’s not all right, and that father must turn out, whether he likes it or not,” answered Dick Hargrave, who was standing near, and occasionally giving Ben a helping hand. He was a lad about sixteen years of age, strongly built, with a good-looking face, exhibiting a firm and determined expression. His dress was more that of a landsman than of a sailor, though it partook of both.

“Flaw or no flaw, I say again, I would hold on fast to the farm, unless I was turned out by force. Your father, Dick, is worth ten of such lords, or a hundred, for that matter. He has held that farm since his father’s time. His father and grandfather and great-grandfather, and I don’t know how many before them, have held it. And right honest people they were. They never thought of interfering with us seafaring men, and would as soon turn spies to the French as give notice to the revenue when a cargo was to be run. If they guessed that any kegs of spirits, or packages of silks or ribbons, were stowed away in one of their barns, they took good care not to be prying about too closely until they knew that the goods had been started off for London.”

“My father always wished to live at peace with his neighbours, and would not injure a smuggler more than any other man who did not interfere with him, though I believe he has never received a keg of brandy or a piece of silk for any service he may have done the smugglers,” said Dick.

“You’re right there, my lad,” said Ben. “I mind once offering your good mother a few yards of stuff to make her a Sunday gown, and, would you believe it? she would not take them. When I just hinted that I should leave them behind me, she was quite offended, and declared that if I did she would speak to your father and have the outhouses kept closed, and that it would be our own fault if some day all our goods were seized. She shut me up, I can tell you. Yes, she is a good woman, and as kind and charitable to the poor as any lady in the land. To my fancy she is a lady just as much as Lord Elverston’s wife. I mind when he was only Squire Oswald. Because he kept hounds and was in Parliament, and came into a heap of money, he got made a lord, and then a marquis, and now he is setting his face against all us seafaring men hereabouts, and vows that he must uphold the revenue laws, and put a stop to smuggling.”

“I have no cause to care for the Marquis of Elverston or his sons either, for often when I have passed them and touched my hat, as in decent manners I was bound to do, they have looked at me as if I was a beggar-boy asking for a ha’penny....