The Rival Campers Ashore The Mystery of the Mill 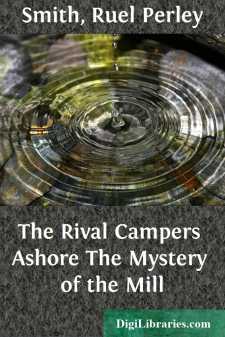 The morning train from Benton, rumbling and puffing along its way through outlying farmland, and sending its billows of smoke like sea rollers across the pastures, drew up, ten miles from the city, at a little station that overlooked a pond, lying clear and sparkling at the base of some low, wooded hills. An old-fashioned, weather-beaten house, adjacent the station, and displaying a sign-board bearing the one word, "Spencer's," indicated that Spencer, whoever he might prove to be, would probably extend the hospitality of his place to travellers. Here and there, widely scattered across the fields, were a few farmhouses.

The locomotive, having announced its approach by a mingled clanging and whistling that sent startled cattle galloping for the shelter of the thickets, came to a dead stop at the station; but, as though to show its realization of the insignificance of Spencer's, continued to snort and throb impatiently. Certain important-appearing trainmen, with sleeves rolled to the elbows, hastily throwing open the door of the baggage-car, seemed to take the hint.

Presently a trunk, turning a summersault through the air, landed, somewhat damaged, on the platform. A few boxes and packages followed likewise, similarly ejected. Then, through the open doorway, there appeared the shapely, graceful bow of a canoe. Whatever treatment this might have received, left to the tender mercies of the trainmen, can only be imagined; for at this moment two youths, who had descended from one of the passenger coaches, came running along the platform.

"Hold on, there," said the larger of the two, addressing a man who stood with arms upreached to catch the end of the canoe, "let me get hold with you. We don't want to be wrecked before we start,—eh, Henry?"

"Hope not," responded his companion, quietly taking the bow of the canoe, which the larger youth relinquished to him, while the latter stepped to the car door and put a stalwart shoulder and arm under the stern, passed to him by a man inside.

Together, the two boys deposited their craft gently on a patch of grass near-by; the locomotive puffed away from Spencer's, dragging its train; the station agent resumed his interrupted pipe. Soon the only sounds that broke the stillness of the place were the clickings of a single telegraph instrument in the station and the scoffing voices of a few crows, circling about the tops of some pine trees that overlooked the farmhouse.

The prospect that met the eyes of the boys was most enticing. On one hand lay the little pond, reflecting some great patches of cloud that flecked the sky. All about them, as far as eye could discern, stretched the country, rolling and irregular, meadow and pasture, corn and wheat land, and groves of maple, pine and birch.

Flowing into the pond, a thin, shadowy stream wound its way through alders and rushes, coming down along past Spencer's, invitingly from the fields and hills. It was the principal inlet of the pond, flowing hence from another and larger pond some miles to the westward....