The Rise and Fall of the Confederate Government 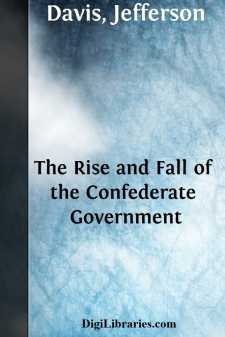 The object of this work has been from historical data to show that the Southern States had rightfully the power to withdraw from a Union into which they had, as sovereign communities, voluntarily entered; that the denial of that right was a violation of the letter and spirit of the compact between the States; and that the war waged by the Federal Government against the seceding States was in disregard of the limitations of the Constitution, and destructive of the principles of the Declaration of Independence.

The author, from his official position, may claim to have known much of the motives and acts of his countrymen immediately before and during the war of 1861-'65, and he has sought to furnish material far the future historian, who, when the passions and prejudices of the day shall have given place to reason and sober thought, may, better than a contemporary, investigate the causes, conduct, and results of the war.

The incentive to undertake the work now offered to the public was the desire to correct misapprehensions created by industriously circulated misrepresentations as to the acts and purposes of the people and the General Government of the Confederate States. By the reiteration of such unappropriate terms as "rebellion" and "treason," and the asseveration that the South was levying war against the United States, those ignorant of the nature of the Union, and of the reserved powers of the States, have been led to believe that the Confederate States were in the condition of revolted provinces, and that the United States were forced to resort to arms for the preservation of their existence. To those who knew that the Union was formed for specific enumerated purposes, and that the States had never surrendered their sovereignty it was a palpable absurdity to apply to them, or to their citizens when obeying their mandates, the terms "rebellion" and "treason"; and, further, it is shown in the following pages that the Confederate States, so far from making war or seeking to destroy the United States, as soon as they had an official organ, strove earnestly, by peaceful recognition, to equitably adjust all questions growing out of the separation from their late associates.

Another great perversion of truth has been the arraignment of the men who participated in the formation of the Confederacy and who bore arms in its defense, as the instigators of a controversy leading to disunion. Sectional issues appear conspicuously in the debates of the Convention which framed the Federal Constitution, and its many compromises were designed to secure an equilibrium between the sections, and to preserve the interests as well as the liberties of the several States. African servitude at that time was not confined to a section, but was numerically greater in the South than in the North, with a tendency to its continuance in the former and cessation in the latter. It therefore thus early presents itself as a disturbing element, and the provisions of the Constitution, which were known to be necessary for its adoption, bound all the States to recognize and protect that species of property....