The Right of American Slavery 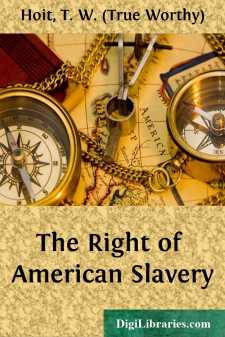 THE RIGHT OF SLAVERY. INTRODUCTION.

African Slavery is, at present, the subject of all-absorbing interest to the American mind; for, our people, almost intoxicated with their own freedom, seem unsatisfied with those manifold blessings acquired by the labors of their sires; and while they are conscious of not excelling them in wisdom, virtue, or valor, they are becoming ideal, and seem willing to sacrifice the practical, safe rules of republican action, for mere idealisms, born in the dizzy sphere of their own over-wrought imaginations. They tremble at the name of Washington, whose purity and moral power shed lustre upon the name of man, and they worship him as a god; but while the real Washington commands the homage of mankind, and stands the intermediate between the race of men and the Infinite, we find the imaginations of men ignoring reason, and embarked upon a voyage aerial, amid the clouds. There they revel high above the mountain tops of Washington, Jefferson, and Franklin, where the atmosphere is pure, where the light is clear, and where the lightnings play; but, alas for human weakness and frailty! they are there only in imagination, though the splendid illusion is to them a reality, and the pleasing dream of ideal beauty, which, by the magic power of transmutation, annihilates or obliterates the reason and memory, destroys those distinctions of great and little, right and wrong, weakness and power, which nature has arbitrarily made, and the experience of mankind recognized as fundamental; upon which all law is based, and all order and civilization sustained and advanced, for the security and elevation of nations and of men.

THE IDEAL AND THE REAL

This ideal element so predominates, in consequence of over or false culture; by the reading of a spurious literature, which dwells in the regions of fiction and romance, to the proportionate neglect of the stirring incidents of our time, which actually go to make up true history—which seem marvellous enough of themselves, without the necessity of invention, or the aid of artificial novelties, except for mere embellishment.

It would seem that the rise and progress of this Republic; the spread of our ocean commerce; the building of a thousand cities; the rush of the world to our shores; the peopling of our boundless plains; the rapid birth of new States into our Union; the triumph of our arms; our repeated accessions of territory; our maritime and commercial superiority; our foreign discoveries; our inventions in mechanism; our discoveries in science; the use of steam, and electricity; our statesmanship, and foreign diplomacy; a thousand miraculous incidents of individual enterprise and success; the discovery of gold, of silver, and iron; our internal improvements and meliorations; our national prestige; and finally, our greatness and glory as a nation,—ought to suffice for any reasonable conception of the marvellous, as they outstrip the more ignoble creations of fancy, and absolutely invade the former domain of fiction and romance. Hence the seeming puerility of fiction when contrasted with these more wondrous phenomena of fact. The substitution of fiction for fact is, therefore, unnecessary and absurd, as it defeats the very purpose intended, by its own inferiority. Its chief effect, then, is but to mislead the mind.

Let us, then, control the imagination; discard the ideal in practical affairs, hold it in its sphere, and adopt the real, in order that by the exercise of right reason we may be enabled to consider the present subject as it is, and not as it would be when weighed in the scale of the ideal; for in this way, and this alone, can we come to just conclusions, and our labors result in practical benefit to those most concerned in the premises. In the spirit of truth, of candor, of sober reality, let us, therefore, approach the subject of American Slavery.

THE NEGRO EVER A SLAVE.

The Negro has been a slave from time immemorial. This is shown from the earliest Egyptian monuments, paintings, and traditions. Herodotus, the father of Grecian History, tells us of negro slavery in Ancient Greece. It existed in Rome also. During the tenth century of the Christian era, the Moors, from Barbary, established an extensive traffic in the cities of Nigritia, where they bought large numbers of slaves; and the merchants of Seville brought slaves from the western coast of Africa, and established slavery in that city, and in Andalusia, long before the time of Columbus. It is also a curious fact in history, that Hanno, the great Carthagenian commander and discoverer, having explored Africa from the Straits of Gibraltar to the bounds of Arabia, brought back to Carthage a cargo of ourang-outangs, which he supposed to be Negro men and women; showing more historically his estimate of African character, than his familiarity with Natural History....