The Rifle and the Hound in Ceylon 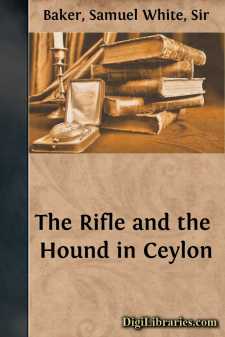 Upwards of twenty years have passed since the 'Rifle and Hound in Ceylon' was published, and I have been requested to write a preface for a new edition. Although this long interval of time has been spent in a more profitable manner than simple sport, nevertheless I have added considerably to my former experience of wild animals by nine years passed in African explorations. The great improvements that have been made in rifles have, to a certain extent, modified the opinions that I expressed in the 'Rifle and Hound in Ceylon.' Breech-loaders have so entirely superseded the antiquated muzzle-loader, that the hunter of dangerous animals is possessed of an additional safeguard. At the same time I look back with satisfaction to the heavy charges of powder that were used by me thirty years ago and were then regarded as absurd, but which are now generally acknowledged by scientific gunners as the only means of insuring the desiderata of the rifle, i.e., high velocity, low trajectory, long range, penetration, and precision.

When I first began rifle-shooting thirty-seven years ago, not one man in a thousand had ever handled such a weapon. Our soldiers were then armed*(*With the exception of the Rifle Brigade) with the common old musket, and I distinctly remember a snubbing that I received as a youngster for suggesting, in the presence of military men, 'that the army should throughout be supplied with rifles.' This absurd idea proposed by a boy of seventeen who was a good shot with a weapon that was not in general use, produced such a smile of contempt upon my hearers, that the rebuke left a deep impression, and was never forgotten. A life's experience in the pursuit of heavy game has confirmed my opinion expressed in the 'Rifle and Hound' in 1854—that the best weapon for a hunter of average strength is a double rifle weighing fifteen pounds, of No. 10 calibre. This should carry a charge of ten drachms of No. 6 powder (coarse grain). In former days I used six or seven drachms of the finest grained powder with the old muzzle-loader, but it is well known that the rim of the breech-loading cartridge is liable to burst with a heavy charge of the fine grain, therefore No. 6 is best adapted for the rifle.

Although a diversity of calibres is a serious drawback to the comfort of a hunter in wild countries, it is quite impossible to avoid the difficulty, as there is no rifle that will combine the requirements for a great variety of game. As the wild goose demands B B shot and the snipe No. 8, in like manner the elephant requires the heavy bullet, and the deer is contented with the small-bore.

I have found great convenience in the following equipment for hunting every species of game in wild tropical countries.

One single-barrel rifle to carry a half-pound projectile, or a four ounce, according to strength of hunter.

Three double-barrelled No. 10 rifles, to carry ten drachms No. 6 powder.

One double-barrelled small-bore rifle, sighted most accurately for deer-shooting....