The Rider in Khaki A Novel 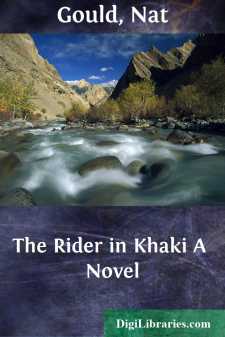 CHAPTER I "WILL HE MARRY HER?"

"Do you think he will marry her?" asked Harry Morby.

"Does anybody know what he will do," replied Vincent Newport, discussing their host Alan Chesney, of Trent Park, a beautiful estate in Nottinghamshire, close to the Dukeries, Sherwood Forest, and the picturesque village of Ollerton.

In the billiard room they had just finished a game of a hundred up, it was an even battle but Morby won by a few points; they were Chesney's friends, captains in the same regiment—the Guards—from which Alan Chesney resigned his commission some twelve months ago. Why he resigned was best known to himself; they had not heard the reason; nobody in the regiment appeared to have any idea.

"She's a splendid woman," said Harry, with a sigh.

"Granted, perhaps one of the most conspicuous of the reigning beauties. It may not be a question of will he marry her but whether she will have him if he asks her," answered Vincent.

"She'll marry him right enough. Why not? By Jove, Vin, what a handsome couple they'd make!" he said.

"Yes, but I doubt if it would be a happy union," said Vincent.

"Good Lord, man, why shouldn't it be? They'd have everything they wanted: money on both sides, estates close together, many things in common, love of racing, sport in general, hunting in particular; they're made for each other."

"All right in that way. No doubt there'd be some friction at times, but very few married people go through life without jars."

"Evelyn Berkeley has had one or two affairs."

"Nothing to her discredit. She's always been allowed to have her head; her father was proud of her in his way, but he was a selfish man, thought more of his pleasures than anything, a bit of an old rip too, if all one hears be correct. As for her mother—you know the story—possibly Berkeley drove her to it."

"Yes, I've heard it. Of course everybody blames her; they always do, the woman pays," said Vincent.

"Marcus Berkeley left her his riches; everything he had went to her.She can't be thirty, at least I should think not," said Harry.

"Is her mother dead?" asked Vincent.

"I don't know; if alive she is not likely to come into her life again," said Harry.

Alan Chesney generally had friends staying with him at Trent Park; it was a hospitable house, where everything was done well. His father was a successful man, head of a great brewery firm, a wonderful manager, a staunch sportsman, the owner of a famous stud, and a conspicuous figure on the turf; his death was a blow to racing, his colors were popular, and his outlay lavish.

Alan Chesney inherited his love for horses and racing, but the immense business of William Chesney & Company, Limited, did not appeal to him, although the bulk of his wealth came from that source. It was a disappointment to his father when Alan elected to go into the army, but as he was bent on it he gave way on condition he resign his commission when he died and become the head of the firm. This was the real reason for Alan's leaving the army; there were others also weighed with him....