The Return of Blue Pete 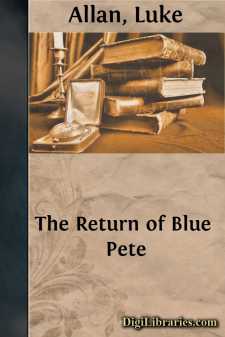 CHAPTER I MAHON ON THE TRAIL

Sergeant Mahon emptied the barracks mail bag on the desk before Inspector Barker and stood awaiting instructions. The Inspector passed his hand over the small pile of letters and let his eye roam from one to another in the speculative way that added zest to the later revelation of their contents.

One from headquarters at Regina he set carefully aside. With an "ah!" of satisfied expectancy he selected one from the remainder and placed it before him. Mahon was mildly interested. The little foibles of his superior were always amusing to him. Eyes still fixed on the envelope, the Inspector commenced to fill his pipe.

"Spoiling for a job, Mahon?"

Mahon's interest was rising. The Inspector went on calmly cramming in the tobacco. When the job was completed to his liking, he thrust the pipe between his lips, flicked a loose flake from his tunic, and forgot to apply a match. Instead, he picked up the envelope and examined it on all sides. Mahon began to grow impatient.

Twice the Inspector turned the letter over. Mahon fretted. He could see on its face the Division headquarters stamp—Lethbridge—but why all this ceremony and pother about an official note that came almost every day? He recalled suddenly that his wife would be holding lunch for him—with fresh fish he had seen unloaded little more than an hour ago from the through train from Vancouver. He could almost smell it sizzling on the natural gas cooker.

"Hm-m!" The envelope was not yet broken. "I imagine this will interest you, Mahon."

Suddenly the Inspector dived into a drawer and, taking from it an official looking envelope, passed it back to the Sergeant. The latter accepted it with fading interest. The Assistant Commissioner at Regina was unfolding to Inspector Barker's immediate superior, the Superintendent at Lethbridge, an unexciting tale of crime. Crime was their daily diet, and this was located far beyond their district.

Somewhere away up north, hundreds of miles beyond the jurisdiction of the Medicine Hat unit of the Mounted Police, events of concern to the Police were happening along the line of the transcontinental railway now under construction. Certain acts of sabotage—tearing down railway trestles and bridges, undermining trains, displacing grade, tampering with rails and switches—were not only hampering construction but endangering life. And things were growing worse. In addition there was complaint of horse-stealing at one isolated camp.

The point of the letter was contained in the last paragraph. Could Superintendent Magwood spare an experienced bushman and trailer to go north and take temporary charge?

Mahon handed the letter back with a laugh.

"Bit of a joke, horse-stealing from contractors who only last year grabbed every stolen horse offered them. Retribution!"

The Inspector swung about on his swivel chair.

"We never discovered who got those horses."

"The ones Blue Pete stole?" A cloud came to Mahon's face....