The Reporter Who Made Himself King 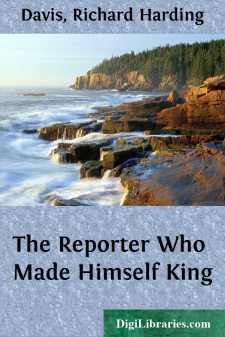 The Old Time Journalist will tell you that the best reporter is the one who works his way up. He holds that the only way to start is as a printer's devil or as an office boy, to learn in time to set type, to graduate from a compositor into a stenographer, and as a stenographer take down speeches at public meetings, and so finally grow into a real reporter, with a fire badge on your left suspender, and a speaking acquaintance with all the greatest men in the city, not even excepting Police Captains.

That is the old time journalist's idea of it. That is the way he was trained, and that is why at the age of sixty he is still a reporter. If you train up a youth in this way, he will go into reporting with too full a knowledge of the newspaper business, with no illusions concerning it, and with no ignorant enthusiasms, but with a keen and justifiable impression that he is not paid enough for what he does. And he will only do what he is paid to do.

Now, you cannot pay a good reporter for what he does, because he does not work for pay. He works for his paper. He gives his time, his health, his brains, his sleeping hours, and his eating hours, and sometimes his life, to get news for it. He thinks the sun rises only that men may have light by which to read it. But if he has been in a newspaper office from his youth up, he finds out before he becomes a reporter that this is not so, and loses his real value. He should come right out of the University where he has been doing "campus notes" for the college weekly, and be pitchforked out into city work without knowing whether the Battery is at Harlem or Hunter's Point, and with the idea that he is a Moulder of Public Opinion and that the Power of the Press is greater than the Power of Money, and that the few lines he writes are of more value in the Editor's eyes than is the column of advertising on the last page, which they are not.

After three years—it is sometimes longer, sometimes not so long—he finds out that he has given his nerves and his youth and his enthusiasm in exchange for a general fund of miscellaneous knowledge, the opportunity of personal encounter with all the greatest and most remarkable men and events that have risen in those three years, and a great fund of resource and patience. He will find that he has crowded the experiences of the lifetime of the ordinary young business man, doctor, or lawyer, or man about town, into three short years; that he has learned to think and to act quickly, to be patient and unmoved when everyone else has lost his head, actually or figuratively speaking; to write as fast as another man can talk, and to be able to talk with authority on matters of which other men do not venture even to think until they have read what he has written with a copy-boy at his elbow on the night previous.

It is necessary for you to know this, that you may understand what manner of man young Albert Gordon was.

Young Gordon had been a reporter just three years. He had left Yale when his last living relative died, and had taken the morning train for New York, where they had promised him reportorial work on one of the innumerable Greatest New York Dailies. He arrived at the office at noon, and was sent back over the same road on which he had just come, to Spuyten Duyvil, where a train had been wrecked and everybody of consequence to suburban New York killed. One of the old reporters hurried him to the office again with his "copy," and after he had delivered that, he was sent to the Tombs to talk French to a man in Murderers' Row, who could not talk anything else, but who had shown some international skill in the use of a jimmy....