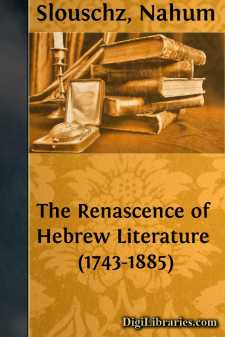 It was long believed that Hebrew had no place among the modern languages as a literary vehicle. The circumstance that the Jews of Western countries had given up the use of their national language outside of the synagogue was not calculated to discredit the belief. The Hebrew, it was generally held, had once been alive, but now it belonged among the dead languages, in the same sense as the Greek and the Latin. And when from time to time some new work in Hebrew, or even a periodical publication, reached a library, the cataloguer classified it with theologic and Rabbinic treatises, without taking the trouble to obtain information as to the subject of the book or the purpose of the journal. In point of fact, in the large majority of cases they were far enough removed from Rabbinic controversy.

Sometimes it happened that one or another Hebraist was overcome with astonishment at the sight of a Hebrew translation of a modern author. And he stopped at that. He never went so far as to enable himself to pass judgment upon it from the critical or the literary point of view. To what purpose? he would ask himself. Hebrew has been dead these many centuries, and to use it is an anachronism. He considered it only a curiosity of literature, literary sleight of hand, nothing more.

The bare possibility of the existence of a modern literature in Hebrew seemed so strange, so improbable, that the best-informed circles refused to entertain the notion seriously—perhaps not without some semblance of a reason for their incredulity.

The history of the development of modern Hebrew literature, its character, the extraordinary conditions fostering it, its very existence, are of a sort to surprise one who has not kept in touch with the internal struggles, the intellectual currents that have agitated the Judaism of Eastern Europe in the course of the past century.

So far from deserving a reputation for casuistry, modern Hebrew literature is, if anything, distinctly rationalistic in character. It is anti-dogmatic and anti-Rabbinic. Its avowed aim is to enlighten the Jewish masses that have remained faithful to religious tradition, and to interpenetrate the Jewish communities with the conceptions of modern life.

Since the French Revolution the ghetto has produced valiant champions of every good cause, politicians, legislators, poets, who have taken part in all the movements of their day. But it has also given birth to a legion of men of action sprung from the people and remaining with the people, who, in the name of liberty of conscience and in the name of science, fought the same battles upon the field of traditional Judaism that the others were fighting outside.

A whole school of literary humanists undertook the work of emancipating the Jewish masses, and pursued it for several generations with admirable zeal. Hebrew became an excellent instrument of propaganda in their hands. Thanks to their efforts, the language of the prophets, inarticulate for nearly two thousand years, was developed to a striking degree of perfection....