The Reminiscences of an Irish Land Agent 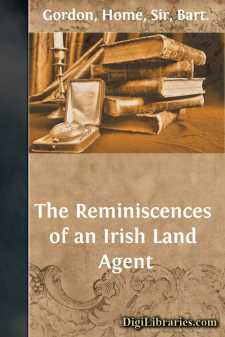 'My father and mother were both Kerry men,' as the saying goes in my native land, and better never stepped.

It was my misfortune, but not my fault, that I was born at Bath and not in Kerry.

However, my earliest recollection is of Dingle, for I was only three months old when I was taken back to Ireland, and up to that time I did not study the English question very deeply, especially as I had an Irish nurse.

There is a lot of Hussey history before I was born, and some is worth preserving here.

It is a thousand pities that so many details of family history have been lost, and to my mind it is incumbent on one member of every reasonably old family in this generation to collect and set down what should be remembered about their ancestors for the unborn to come.

My contribution does not profess to be very exhaustive, but it will serve for want of a better.

When a man claims to be descended from Irish kings, it generally means that his forbears were bigger scoundrels than he is, for they were cattle-lifters and marauders, whilst his depredations are probably disguised under some of the many insidious forms of finance. Just as every Scotsman is not canny and every American is not cute, so every Irishman is not what the Saxon believes him to be. But there can be little doubt what type of men these ancient Irish sovereigns were, and I regretfully confess I cannot trace my descent from them.

The family of Hussey was of English extraction, according to that rather valuable book The Antient and Present State of the County of Kerry, by Charles Smith, 1756—the companion volumes dealing with Cork and Waterford are much less precious. Personally I always understood that the Husseys hailed from Normandy, as will be seen a few pages on, but tradition on such a point is not of much value.

Anyway the family of Hussey settled in very early times at Dingle, and also had several lands and castles in the barony of Corkaquiny.

Dingle was the only town in this barony, and it was incorporated by Queen Elizabeth in 1585, when she granted it the same privileges which were enjoyed by Drogheda, with a superiority over the harbours of Ventry and Smerwick. The Virgin Sovereign also presented the town with £300 for the purpose of making a wall round it.

The Irish formerly called Dingle Daingean in Cushy, or the fastness of the Husseys. One of the FitzGeralds, Earl of Desmond, had granted to an ancestor of my own a considerable tract of land in these parts, namely, from Castle-Drum to Dingle, or as others say, he gave him as much as he could walk over in his jackboots in one day. That Hussey built a castle, said to be the first erected at Dingle, the vaults of which were afterwards used as the county gaol.

There is mention of this in the grant of a charter to Dingle by King James I. in the fourth year of his reign: 'The house of John Hussey granted for a gaol and common hall to the corporation.'

A grim interest lurks in the fact that the dedication of Smith's History to Lord Newport, Lord Chancellor of Ireland, recites that 'this Kingdom, my lord, is a kind of Terra Incognita to the greater part of Europe.'

Is it not so to this day?

Do I not meet scores of people who tell me they would love to go to Kerry, but they have never been nearer than Killarney.

That is the sort of speech which makes me wonder how geography is taught.

It is on a par with the remark of a prominent Arctic explorer, that he had never been to Killarney because it was so far off.

The chief Elizabethan settlers in Kerry were William and Charles Herbert, Valentine Brown, ancestor of the Kenmares, Edmund Denny, and Captain Conway, whose daughter Avis married Robert Blennerhasset, while a little later, in 1600, John Crosbie was made Bishop of Ardfert and Aghadoe.

To-day the descendants of those settlers are still among the principal folk in Kerry, though that is more due to their own selves than to the support they had from any British Government.

This Valentine Brown, who was a worshipful and valiant knight, wrote a discourse for settling Munster in 1584. His plan was to exterminate the FitzGeralds and to protestantise Ireland; but by the irony of fate his own son married a daughter of the Earl of Desmond and became a Roman Catholic.

In the Carew Manuscript it is recorded that he estimated that one constable and six men would suffice for Cork, but for Ventry, 'a large harbour near Dingle,' one constable and fifty men were necessary; so he evidently had a clear apprehension of the villainous capabilities of the men of Kerry....