The Reminiscences of an Astronomer 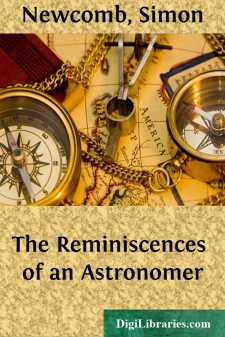 THE WORLD OF COLD AND DARKNESS

I date my birth into the world of sweetness and light on one frosty morning in January, 1857, when I took my seat between two well-known mathematicians, before a blazing fire in the office of the "Nautical Almanac" at Cambridge, Mass. I had come on from Washington, armed with letters from Professor Henry and Mr. Hilgard, to seek a trial as an astronomical computer. The men beside me were Professor Joseph Winlock, the superintendent, and Mr. John D. Runkle, the senior assistant in the office. I talked of my unsuccessful attempt to master the "Mécanique Céleste" of Laplace without other preparation than that afforded by the most meagre text-books of elementary mathematics of that period. Runkle spoke of the translator as "the Captain." So familiar a designation of the great Bowditch—LL. D. and a member of the Royal Societies of London, Edinburgh, and Dublin—quite shocked me.

I was then in my twenty-second year, but it was the first time I had ever seen any one who was familiar with the "Mécanique Céleste." I looked with awe upon the assistants who filed in and out as upon men who had all the mysteries of gravitation and the celestial motions at their fingers' ends. I should not have been surprised to learn that even the Hibernian who fed the fire had imbibed so much of the spirit of the place as to admire the genius of Laplace and Lagrange. My own rank was scarcely up to that of a tyro; but I was a few weeks later employed on trial as computer at a salary of thirty dollars a month.

How could an incident so simple and an employment so humble be in itself an epoch in one's life—an entrance into a new world? To answer this question some account of my early life is necessary. The interest now taken in questions of heredity and in the study of the growing mind of the child may excuse a word about my ancestry and early training.

Though born in Nova Scotia, I am of almost pure New England descent. The first Simon Newcomb, from whom I am of the sixth generation, was born in Massachusetts or Maine about 1666, and died at Lebanon, Conn., in 1745. His descendants had a fancy for naming their eldest sons after him, and but for the chance of my father being a younger son, I should have been the sixth Simon in unbroken lineal descent. [1]

Among my paternal ancestors none, so far as I know, with the exception of Elder Brewster, were what we should now call educated men. Nor did any other of them acquire great wealth, hold a high official position, or do anything to make his name live in history. On my mother's side are found New England clergymen and an English nonconformist preacher, named Prince, who is said to have studied at Oxford towards the end of the seventeenth century, but did not take a degree. I do not know of any college graduate in the list.

Until I was four years old I lived in the house of my paternal grandfather, about two miles from the pretty little village of Wallace, at the mouth of the river of that name. He was, I believe, a stonecutter by trade and owner of a quarry which has since become important; but tradition credits him with unusual learning and with having at some time taught school....