The Religious Sentiment Its Source and Aim: A Contribution to the Science and Philosophy of Religion 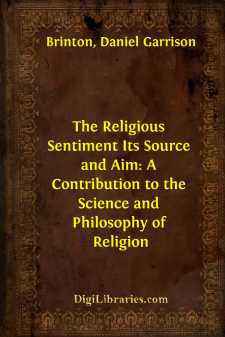 CHAPTER I.THE BEARING OF THE LAWS OF MIND ON RELIGION.

The Science of Religion is one of the branches of general historical science. It embraces, as the domain of its investigation, all recorded facts relating to the displays of the Religious Sentiment. Its limits are defined by those facts, and the legitimate inferences from them. Its aim is to ascertain the constitutive laws of the origin and spread of religions, and to depict the influence they have exerted on the general life of mankind.

The question whether a given religion is true or false cannot present itself in this form as a proper subject of scientific inquiry. The most that can be asked is, whether some one system is best suited to a specified condition of the individual or the community.

The higher inquiry is the object of the Philosophy of Religion. This branch of study aims to pass beyond recorded facts and local adjustments in order to weigh the theoretical claims of religions, and measure their greater or less conformity with abstract truth. The formal or regulative laws of religious thought occupy it.

Theology, dogmatic or polemic, is an explanatory defence of some particular faith. Together with mythology and symbolism, it furnishes the material from which the Science and Philosophy of Religion seek to educe the laws and frame the generalizations which will explain the source and aim of religion in general.

The common source of all devotional displays is the Religious Sentiment, a complex feeling, a thorough understanding of which is an essential preliminary to the study of religious systems.

Such a study proceeds on the assumption that all religions are products of thought, commenced and continued in accordance with the laws of the human mind, and, therefore, comprehensible to the extent to which these laws are known. No one disputes this, except in reference to his own religion. This, he is apt to assert, had something “supernatural” about its origin. If this word be correctly used, it may stand without cavil. The “natural” is that of which we know in whole or in part the laws; the “supernatural” means that of which we do not at present know in any degree the laws. The domain of the supernatural diminishes in the ratio of the increase of knowledge; and the inference that it also is absolutely under the control of law, is not only allowable but obligatory.

A second assumption must be that there is a unity of kind and purpose in all religions. Without this, no common law can exist for them. Such a law must hold good in all ages, in every condition of society, and in each instance. Hence those who explain religious systems as forms of government, or as systems of ethics, or as misconceived history, or as theories of natural philosophy, must be prepared to make their view good when it is universally applied, or else renounce the possibility of a Science of Religion; while those who would except their own system from what they grant is the law of all others, violate the principles of investigation and thereby the canons of truth.

The methods of science are everywhere alike. Has the naturalist to explain an organism, he begins with its elements or proximate principles as obtained by analysis; he thence passes to the tissues and fluids which compose its members; these he considers first in a state of repose, their structure and their connections; then he examines their functions, the laws of their growth and action; and finally he has recourse to the doctrine of relations, la théorie des milieux, to define the conditions of its existence. Were such a method applied to a religion, it would lead us first to study its psychological elements, then the various expressions in word and act to which these give occasion, next the record of its growth and decay, and finally from these to gather the circumstantials of human life and culture which led to its historic existence....