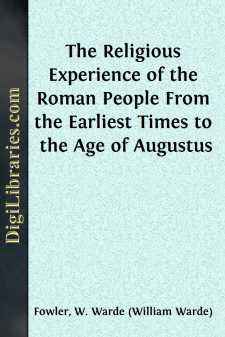 Lord Gifford in founding his lectureship directed that the lectures should be public and popular, i.e. not restricted to members of a University. Accordingly in lecturing I endeavoured to make myself intelligible to a general audience by avoiding much technical discussion and controversial matter, and by keeping to the plan of describing in outline the development and decay of the religion of the Roman City-state. And on the whole I have thought it better to keep to this principle in publishing the lectures; they are printed for the most part much as they were delivered, and without footnotes, but at the end of each lecture students of the subject will find the notes referred to by the numbers in the text, containing such further information or discussion as has seemed desirable. My model in this method has been the admirable lectures of Prof. Cumont on "les Religions Orientales dans le Paganisme Romain."

I wish to make two remarks about the subject-matter of the lectures. First, the idea running through them is that the primitive religious (or magico-religious) instinct, which was the germ of the religion of the historical Romans, was gradually atrophied by over-elaboration of ritual, but showed itself again in strange forms from the period of the Punic wars onwards. For this religious instinct I have used the Latin word religio, as I have explained in the Transactions of the Third International Congress for the History of Religions, vol. ii. p. 169 foll. I am, however, well aware that some scholars take a different view of the original meaning of this famous word, which has been much discussed since I formed my plan of lecturing. But I do not think that those who differ from me on this point will find that my general argument is seriously affected one way or another by my use of the word.

Secondly, while I have been at work on the lectures, the idea seems to have been slowly gaining ground that the patrician religion of the early City-state, which became so highly formalised, so clean and austere, and eventually so political, was really the religion of an invading race, like that of the Achaeans in Greece, engrafted on the religion of a primitive and less civilised population. I have not definitely adopted this idea; but I am inclined to think that a good deal of what I have said in the earlier lectures may be found to support it. Once only, in Lecture XVII., I have used it myself to support a hypothesis there advanced.

I have retained the familiar English spelling of certain divine names, e.g. Jupiter (instead of Iuppiter), as less startling to British readers.

I wish to express my very deep obligations to the works of Prof. Wissowa and Dr. J. G. Frazer, and also to Mr. R. R. Marett, who gave me useful personal help in my second and third lectures. From Prof. Wissowa and Dr. Frazer I have had the misfortune to differ on one or two points; but "difference of opinion is the salt of life," as a great scholar said to me not long ago. In reading the proofs I have had much kind and valuable help from my Oxford friends Mr....