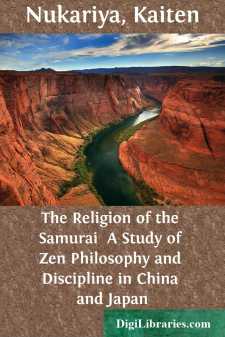 Buddhism is geographically divided into two schools[FN#1]—the Southern, the older and simpler, and the Northern, the later and more developed faith. The former, based mainly on the Pali texts[FN#2] is known as Hinayana[FN#3] (small vehicle), or the inferior doctrine; while the latter, based on the various Sanskrit texts,[4] is known as Mahayana (large vehicle), or superior doctrine. The chief tenets of the Southern School are so well known to occidental scholars that they almost always mean the Southern School by the word Buddhism. But with regard to the Northern School very little is known to the West, owing to the fact that most of its original texts were lost, and that the teachings based on these texts are written in Chinese, or Tibetan, or Japanese languages unfamiliar to non-Buddhist investigators.

[FN#1] The Southern School has its adherents in Ceylon, Burma, Siam,Anan, etc.; while the Northern School is found in Nepal, China,Japan, Tibet, etc.

[FN#3] The Southern Buddhists never call their faith Hinayana, the name being an invention of later Buddhists, who call their doctrine Mahayana in contradistinction to the earlier form of Buddhism. We have to notice that the word Hinayana frequently occurs in Mahayana books, while it does not in Hinayana books.

[FN#4] A catalogue of the Buddhist Canon, K'-yuen-luh, gives the titles of 897 Mahayana sutras, yet the most important books often quoted by Northern Buddhist teachers amount to little more than twenty. There exist the English translation of Larger Sukhavati-vyuha-sutra, Smaller Sukhavati-vyuha-sutra, Vajracchedika-sutra, Larger Prajna-paramita-hradya-sutra, Smaller Prajna-paramita-hrdaya-sutra, by Max M?ller, and Amitayur-dhyana-sutra, by J. Takakusu, in 'Sacred Books of the East,' vol. xlix. An English translation of Saddharma-pundarika-sutra, by Kern, is given in 'Sacred Books of the East,' Vol. xxi. Compare these books with 'Outlines of Mahayana Buddhism,' by D. Suzuki.

It is hardly justifiable to cover the whole system of Buddhism with a single epithet[FN#5] 'pessimistic' or 'nihilistic,' because Buddhism, having been adopted by savage tribes as well as civilized nations, by quiet, enervated people as well as by warlike, sturdy hordes, during some twenty-five hundred years, has developed itself into beliefs widely divergent and even diametrically opposed. Even in Japan alone it has differentiated itself into thirteen main sects and forty-four sub-sects[FN#6] and is still in full vigour, though in other countries it has already passed its prime. Thus Japan seems to be the best representative of the Buddhist countries where the majority of people abides by the guiding principle of the Northern School. To study her religion, therefore, is to penetrate into Mahayanism, which still lies an unexplored land for the Western minds. And to investigate her faith is not to dig out the remains of Buddhist faith that existed twenty centuries ago, but to touch the heart and soul of Mahayanism that enlivens its devotees at the present moment.

[FN#5] Hinayanism is, generally speaking, inclined to be pessimistic, but Mahayanism in the main holds the optimistic view of life....