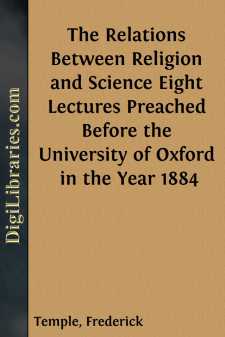 LECTURE I. THE ORIGIN AND NATURE OF SCIENTIFIC BELIEF.

'O Lord, how manifold are Thy works: in wisdom hast Thou made them all; the earth is full of Thy riches.' —Psalm civ. 24.

Those who believe that the creation and government of the world are the work of a Being Whom it is their duty to love with all their hearts, Who loves them with a love beyond all other love, to Whom they look for guidance now and unending happiness hereafter, have a double motive for studying the forms and operations of Nature; because over and above whatever they may gain of the purest and highest pleasure in the study, and whatever men may gain of material comfort in a thousand forms from the results of the study, they cannot but have always present to their minds the thought, that all these things are revelations of His character, and to know them is in a very real measure to know Him. The believer in God, if he have the faculty and the opportunity, cannot find a more proper employment of time and labour and thought than the study of the ways in which God works and the things which God has made. Among religious men we ought to expect to find the most patient, the most truth-seeking, the most courageous of men of science.

We know that it is not always so; and that on the contrary Science and Religion seem very often to be the most determined foes to each other that can be found. The scientific man often asserts that he cannot find God in Science; and the religious man often asserts that he cannot find Science in God. Each often believes himself to be in possession, if not of the whole truth, at any rate of all the truth that it is most important to possess. Science seems to despise religion; and religion to fear and condemn Science. Religion, which certainly ought to put truth at the highest, is charged with refusing to acknowledge truth that has been proved. And Science, which certainly ought to insist on demonstrating every assertion which it makes, is charged with giving the rein to the imagination and treating the merest speculations as well-established facts.

To propose to reconcile these opposites would be a task which hardly any sane man would undertake. It would imply a claim to be able to rise at once above both, and see the truth which included all that both could teach. But it is a very useful undertaking, and not beyond the reach of thoughtful inquiry by an ordinary man, to examine the relations between the two, and thus to help not a few to find a way for themselves out of the perplexity. And this inquiry may well begin by asking what is the origin and nature of scientific belief on the one hand and of religious belief on the other. In this Lecture I propose to deal with the former.

It is not necessary to include in the Science of which I am to speak either Mathematics or Metaphysics. In as far as I need touch on what belongs to either, it will be only for the purpose of answering objections or of excluding what is irrelevant. And the consequent restriction of our consideration to the Science which concerns itself with Nature greatly simplifies the task that I have undertaken. For it will be at once admitted in the present day by all but a very few that the source of all scientific knowledge of this kind is to be found in the observations of the senses, including under that word both the bodily senses which tell us all we know of things external, and that internal sense by which we know all or nearly all that takes place within the mind itself. And so also will it be admitted that the Supreme Postulate, without which scientific knowledge is impossible, is the Uniformity of Nature.