The Reign of Tiberius, Out of the First Six Annals of Tacitus; With His Account of Germany, and Life of Agricola 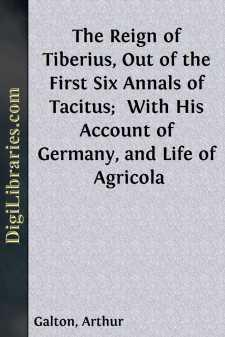 "I am going to offer to the publick the Translation of a work, which, for wisdom and force, is in higher fame and consideration, than almost any other that has yet appeared amongst men:" it is in this way, that Thomas Gordon begins The Discourses, which he has inserted into his rendering of Tacitus; and I can find none better to introduce this volume, which my readers owe to Gordon's affectionate and laborious devotion. Caius Cornelius Tacitus, the Historian, was living under those Emperors, who reigned from the year 54 to the year 117, of the Christian era; but the place and the date of his birth are alike uncertain, and the time of his death is not accurately known. He was a friend of the younger Pliny, who was born in the year 61; and, it is possible, they were about the same age. Some of Pliny's letters were written to Tacitus: the most famous, describes that eruption of Mount Vesuvius, which caused the death of old Pliny, and overwhelmed the cities of Pompeii and of Herculaneum. The public life of Tacitus began under Vespasian; and, therefore, he must have witnessed some part of the reign of Nero: and we read in him, too, that he was alive after the accession of the Emperor Trajan. In the year 77, Julius Agricola, then Consul, betrothed his daughter to Tacitus; and they were married in the following year. In 88, Tacitus was Praetor; and at the Secular Games of Domitian, he was one of the Quindecimviri: these were sad and solemn officers, guardians of the Sibylline Verse; and intercessors for the Roman People, during their grave centenaries of praise and worship.

From a passage in "The Life of Agricola," we may believe that Tacitus attended in the Senate; for he accuses himself as one of that frightened assembly, which was an unwilling participator in the cruelties of Domitian. In the year 97, when the Consul Virginius Rufus died, Tacitus' was made Consul Suffectus; and he delivered the funeral oration of his predecessor: Pliny says, that "it completed the good fortune of Rufus, to have his panegyric spoken by so eloquent a man." From this, and from other sayings, we learn that Tacitus was a famous advocate; and his "Dialogue about Illustrious Orators" bears witness to his admirable taste, and to his practical knowledge of Roman eloquence: of his own orations, however, not a single fragment has been left. We know not, whether Tacitus had children; but the Emperor Tacitus, who reigned in 275, traced his genealogy to the Historian. "If we can prefer personal merit to accidental greatness," Gibbon here observes, "we shall esteem the birth of Tacitus more truly noble than that of Kings. He claimed his descent from the philosophic historian, whose writings will instruct the last generations of mankind. From the assiduous study of his immortal ancestor, he derived his knowledge of the Roman Constitution and of human nature." This Emperor gave orders, that the writings of Tacitus should be placed in all the public libraries; and that ten copies should be taken annually, at the public charge....